I’ve taken a short break from horror to review Stripped to the Bone: portraits of Syrian Women by Ghada Alatrash, a short story collection peppered with beautiful poetry, and set for the most part in Syria. 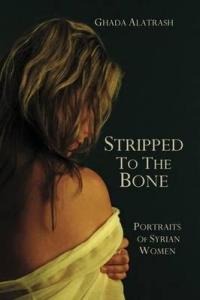 “Set between war-torn Syria and the West, Stripped to the Bone explores issues of identity, love, strife, courage and resilience in seven fictional portraits of Syrian women. Syrian-Canadian author and translator Ghada Alatrash is a Doctoral Student at the Werklund School of Education, University of Calgary She has an MA in English Literature from the University of Oklahoma. One of her goals is to amplify the voices of the marginalized through her writings. She translated and published a collection of Arabic poems in English, entitled So that the Poem Remains.”

Stripped to the Bone  opens with the natural yearnings of Zahrah, a single woman ageing and in need of a husband, who fills her heart with Hollywood movies to escape her edge of survival existence in a war zone. Then there’s the story of Reem and Mayyada, two women both unjustly imprisoned and forced to endure torture and rape. Here the abuse of a zealot brother is juxtaposed with the almost faceless and arbitrary violence of the prison officers, Alatrash making observations relevant to all women everywhere.

In Stripped to the Bone ancient traditions are portrayed alongside modern values and lifestyles as Syrian women hold on to what is precious and beautiful while adapting to modern ways. In ‘Hanaan and Salaam’ the author tackles homophobia, in ‘Lama’ multicultural relationships, as those Syrians who have fled their homeland adapt to their new lives.

Written in gentle, ironic and often sensual prose, this collection oozes intimacy. Alatrash infuses her stories with pride and anguish, pride in her culture and anguish over the cruelties meted out in the name of God and country. But above all, Alatrash is concerned with the unjust war Syria endures, a civil war with all too powerful interested parties, a proxy war involving America, Russia and Saudi Arabia and their various allies: a bloodbath. In this collection, the geopolitics of Syria forms a translucent backdrop, Alatrash leaving it to the reader to educate themselves if they wish. Of concern for the author is the impact all of the various injustices have had on women’s lives.

In ‘Um Jaad’, a story of a Syrian woman travelling to visit her sister in Homs who has just lost her little boy, Alatrash writes:

“More deafening than the screams was the silence of the world.” It was her sister “Who lived the pain of the atrocities erasing Syrians off the map.”

Interwoven in stories that invite reflection and at times confront the reader with harsh and horrifying realities, is beautiful verse, verse that depicts the Syrian soul, verse to savour and revisit time and again.

Stripped to the Bone is a questioning and intelligent book, at once romantic, poignant and passionate. A huge sadness pervades the collection, a sense of loss of culture, of heritage and of all that is meaningful and valuable and important in women’s lives. The reader will take away the thought that what continues to happen in Syria should never have begun. Timely and significant, Stripped to the Bone is a must read for anyone wanting to understand Syria from within, from the perspective of the everyday domestic lives of its women.

You can purchase a copy here