I am delighted to share my piece on Alice Bailey, World Goodwill and the United Nations, featured in the March issue of Live Encounters Magazine.

“Esotericism is concerned with explanations and manipulations of the inner planes of existence. Alice Bailey’s writings belong to the variant of Western Esotericism known as Theosophy. While the term can be traced back to Neoplatonist Porphyry to describe a combination of the capacities of the philosopher, the artist and the priest, it was Russian aristocrat and Spiritualist Madame Helena Petrovna Blavatsky who harnessed theosophy when she founded the Theosophical Society in 1875. British aristocrat and former devout Christian, Alice A. Bailey (born in 1880 Alice La Trobe-Bateman) was a second-generation Theosophist in communication with the same Master of the Wisdom as Blavatsky: The Tibetan or Djwhal Khul.

Drawing on Eastern mysticism and Western occult formulations, Bailey wrote twenty-four volumes, most as The Tibetan’s amanuensis, dedicated to informing future generations of seekers of the coming new age of spiritual enlightenment. Written between 1919 and 1949, Bailey’s opus includes works on meditation, esoteric healing, astrology, initiation, the chakras, yoga, education and psychology, along with an abstruse treatise on cosmology, A Treatise on Cosmic Fire. She also provides detailed explanations of the Plan of the Spiritual Hierarchy of Masters for the forthcoming era and instructions to her disciples to make that plan a reality. Much of the writing is impenetrable and alien to non-esotericists. The tone is instructional and dry. There is nothing exotic and enticing in the style and yet many will mention a strange almost magnetic pull once the mind starts to grapple with the meaning held within.

Of all the spiritual and occult teachers of her day, Alice Bailey was one of the most prolific and determined. Her legacy, whilst hidden, runs deep. She is regarded in scholarly circles to be the main theorist of the New Age movement, her teachings informing an early vanguard of writers and practitioners who went on to influence future generations of seekers. Many leading New Age proponents champion or acknowledge her influence. She is also a pet hate among conspiracy theorists, mostly due to her belief in the need for a ‘new world order’ based on ‘a plan’ devised by spiritual masters.

Alice Bailey’s main goal was to purify esotericism and make esoteric practice serve good not evil purposes. She imbued Theosophy with the basic Christian principle of goodwill and believed in the Second Coming of Christ. She exercised her formidable missionary zeal to establish all the foundations necessary to fulfil her vision for a better world…”  To continue reading the article:

To read the digital mag on your phone click on this link – https://issuu.com/liveencounters/docs/live_encounters_magazine_february_2_4eeba753253cf2?e=0 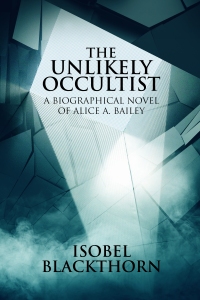 To read more about Alice Bailey in my biographical novel, click this link.