Lanzarote photos from the 1980s

When I left Lanzarote in 1990, I didn’t take my possessions with me. I had every intention of going back. Heaven only knows what happened to all my books, records, photos, mementoes and my clothes! Here is a photo diary of that time.

It all started in 1988, in a basement flat in Exeter. I was Yvonne Rodgers back then. I was 26, studying for my degree, and very much into a hedonistic lifestyle. 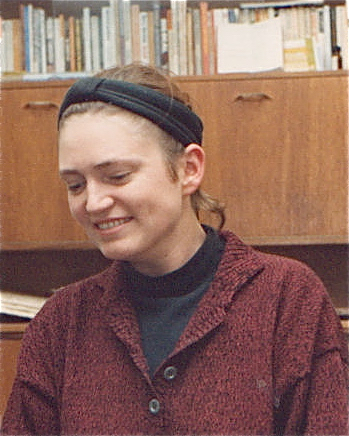 In January of that year, I went on holiday with my then partner, David Riebold, who took this photo. I call it my Marilyn Monroe shot. It was taken on the patio of Winston Churchill’s daughter’s holiday home near Arrieta, recently purchased by our friends, Dammy and Barry. 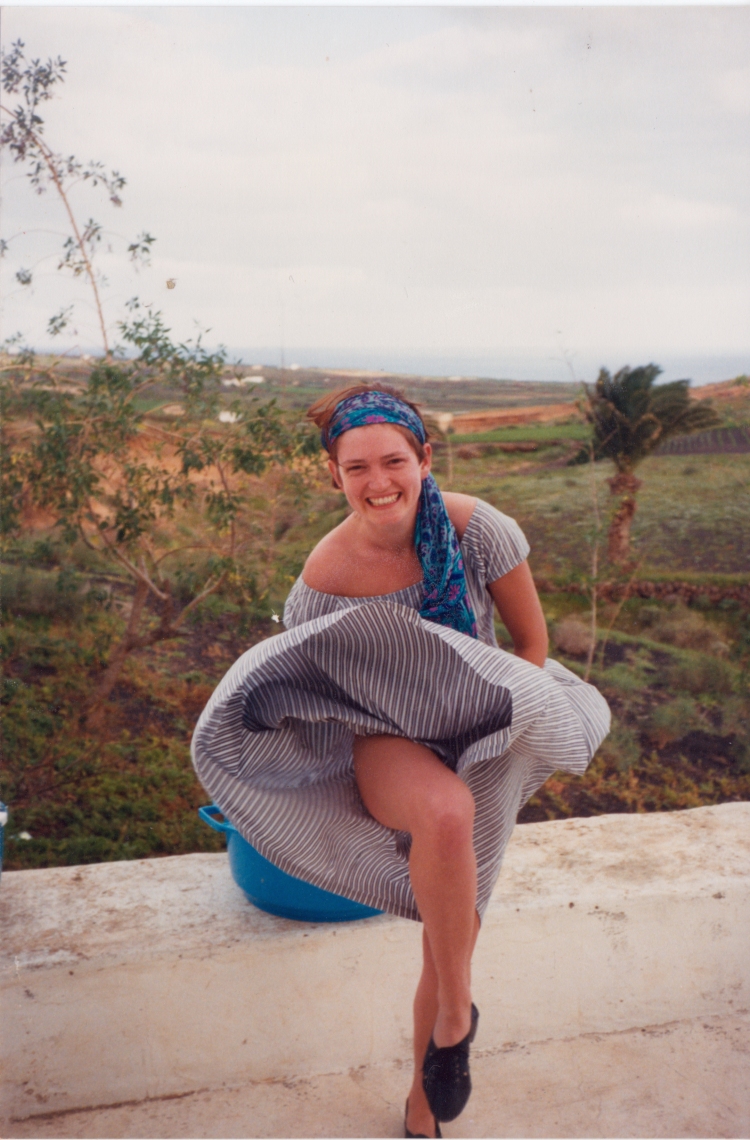 While we were there, we both fell in love with this ruin. It’s between 200-300 years old and is situated in Haría, in the island’s north. 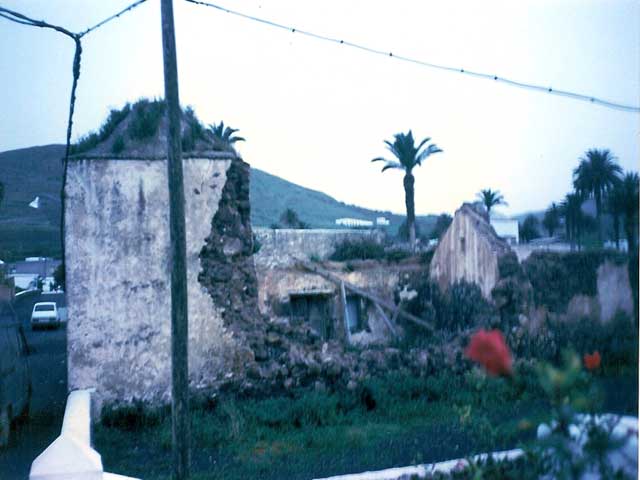 We bought it and turned it into this. 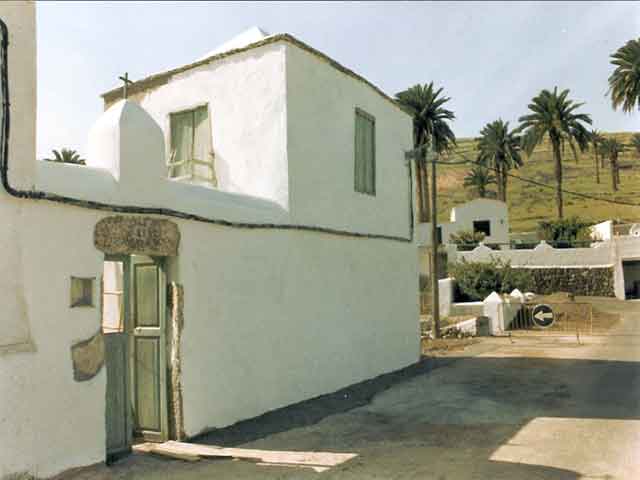 It was my idyll, but I didn’t live there long. Just long enough to paint it white, in fact. I moved out, around the corner, and found myself the neighbour of this man.

We’re a bit out of it, on account of the cake I made for his birthday. He’s Domingo Diaz Barrios, an indigenous artist. We became firm friends. He was living in his grandmother’s farmhouse, tucked behind César Manrique’s residence. It didn’t have running water, and the rooms were dark and small.

The place I was living in was a building site, and it wasn’t long before I moved on. Or rather, I was swept off my feet, scooped up and deposited in a fine old house in the same village, owned by the most charismatic man there ever was, the notorious adventurer, Miguel Medina Rodriguez. This is the interior courtyard of his house. Miguel was proud of his plants. Those stairs lead to an upstairs room. In it was a four poster bed, a rocking chair, and a casement window looking out over the village. Towards the end of my stay, I spent three months shut away in that room. Long story. 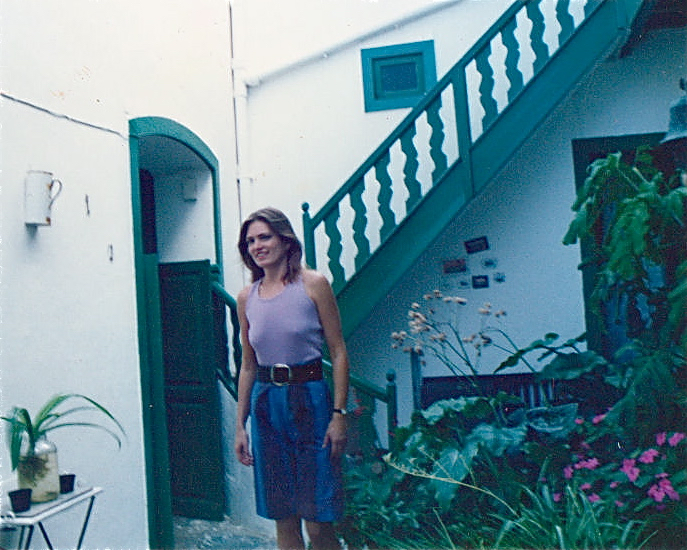 We used to eat at this woman’s house, a warren of tiny rooms. Her name was Inez. Her home was known as ‘Casa Inez’, and she ran a home-restaurant a few doors down from Miguel’s. You ate whatever she had going and her food was delicious. I would sit and watch a woman on a stool peeling garlic. I would soak in the atmosphere, the smells. 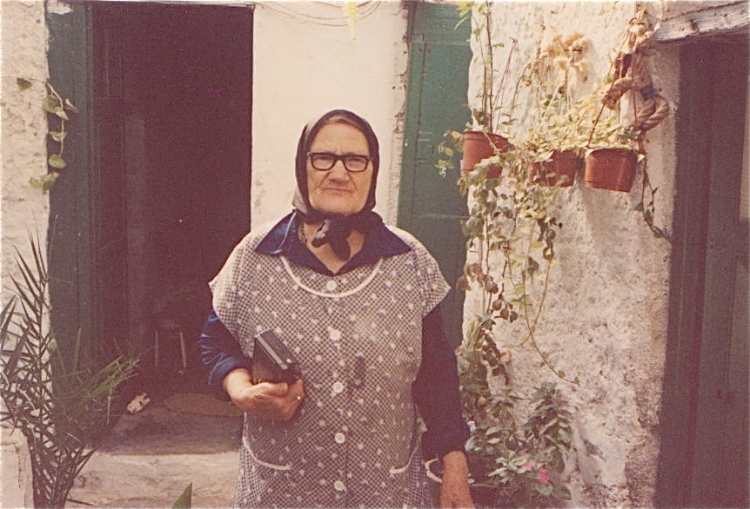 Because Miguel’s father was a tailor, there was a room in the house devoted to making clothes, with a huge table in its centre. It was in there that I created the pants in the photo above. I hand painted the fabric using sponges and rollers and stencils Domingo made for me. I then sewed the clothes, mostly by hand. I sold my clothes at the market in Teguise. I also made these: 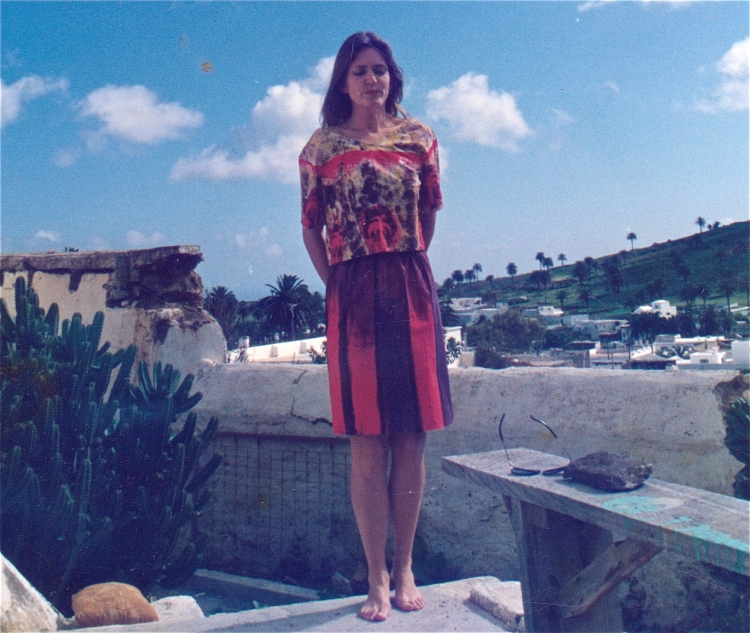 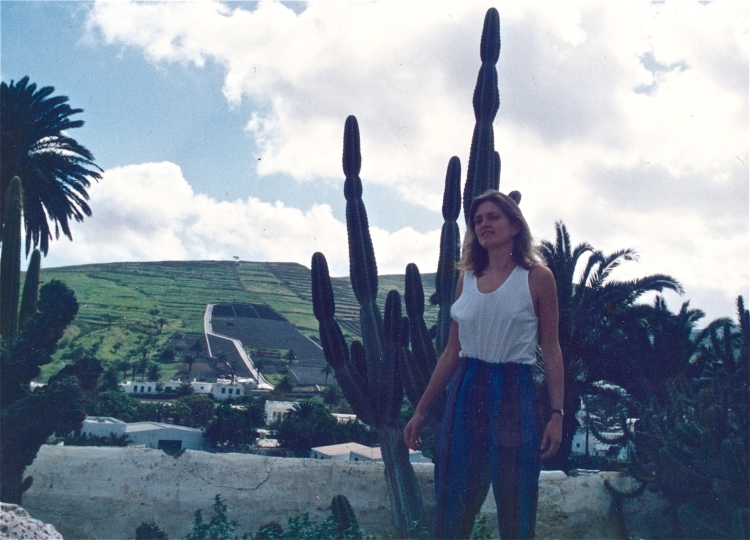 I had myself a little piece of paradise. I was living in the house rent free. But it was all so bohemian and really rather dangerous. So I left…

I went back in 2016. Miguel’s house in Calle Cruz de Ferrer is currently shut up and uninhabited. Domingo moved out of his grandmother’s farmhouse, buying another house in the same street, where he has a studio and a small shop selling his wares. The ruin I helped restore can be rented as holiday accommodation.

I keep writing books about the island, because somehow I am still bonded to the place. Maybe my things are still in Miguel’s house. It wouldn’t surprise me. Maybe one day I’ll find out. I’m planning another trip, in 2020. It feels like an awfully long time to wait. Meanwhile…