How could I forego the invitation to visit Punta Jandía, Fuertventura’s southern tip. I’d already passed up the opportunity to visit Villa Winter and the village of Cofete due to the nature of the drive. But I was reassured that the drive to Punta Jandía was straight and flat and no big deal at all, even for fearful me.

A windy narrow road heading south from Morro Jable soon gave way to a dirt track badly in need of grading. Pot holes and corrugations and dubious edges formed this wriggling snake of a road set halfway up the skirt of the mountain range. Like everywhere else on this island, there was nothing to break a fall. This road was not made for scaredy cats like me. But I held on tight and, after insisting we travelled at the pace of a snail, mustered as much confidence in my driver, the oncoming traffic, fate and life itself as I could manage. We passed the turnoff to Cofete and I observed the way that road hugged the mountainside. I even saw the lookout over Cofete. Very nice. I would never go there. Apparently, many get to the lookout, observe the even more confronting drive down the other side and turn back.

These old roads were built in the 1930s when General Gustav Winter was building his little German empire down this way. During the Second World War, Germany owned Jandía. It’s a dark and fascinating history, which I am sure to tell in a novel one day.

Eventually we exited the wriggly portion of the road and headed along a flat plain sloping gently down to the ocean. Not much further and we pulled up in the lighthouse car park.

It’s an iconic spot. You can tell that from the number of cars parked in the photo below. None stay long. All the visitors do what we did, have a good look around, take some photos, then get fed up being blasted by the wind and seek shelter and lunch in the hamlet in the near distance. 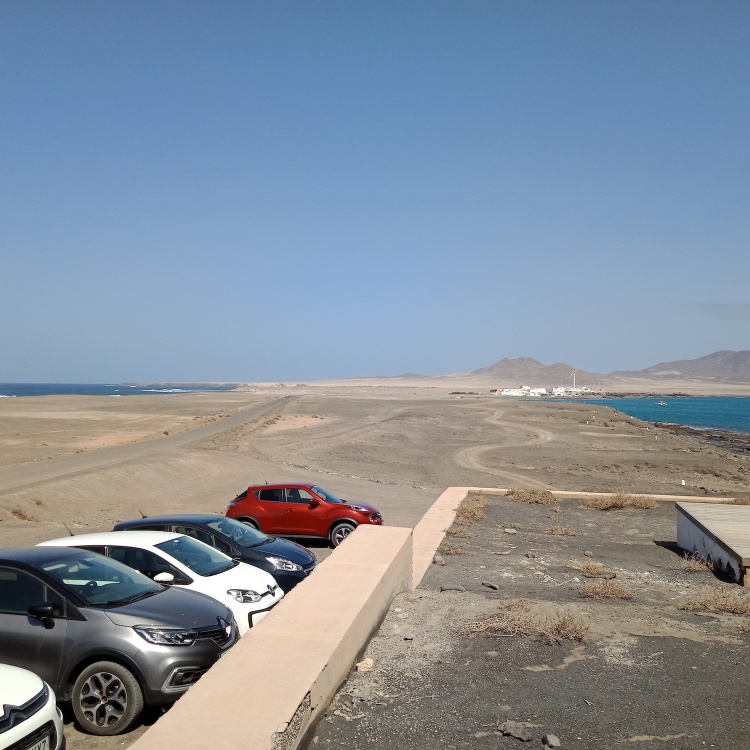 Situated on an isthmus, the lighthouse takes up almost the whole area at the southeastern tip of the island. While clearly impressive and still operational, we found the lighthouse building dusty and closed up and the best that can be said is it forms a bit of a wind break in certain spots. 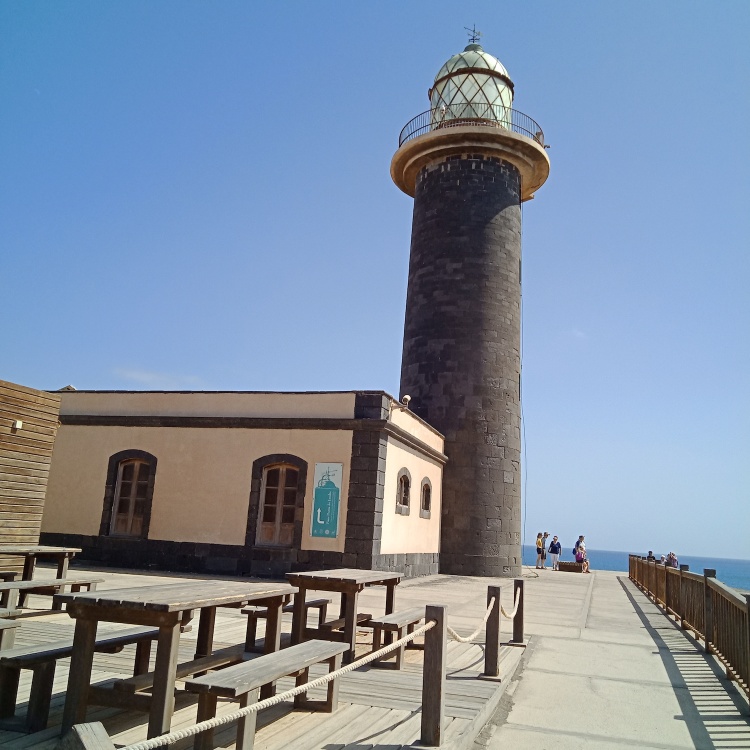 Down here, it is all about the views and the ocean and watching where east meets west and the waves break from both sides. Mesmerising. 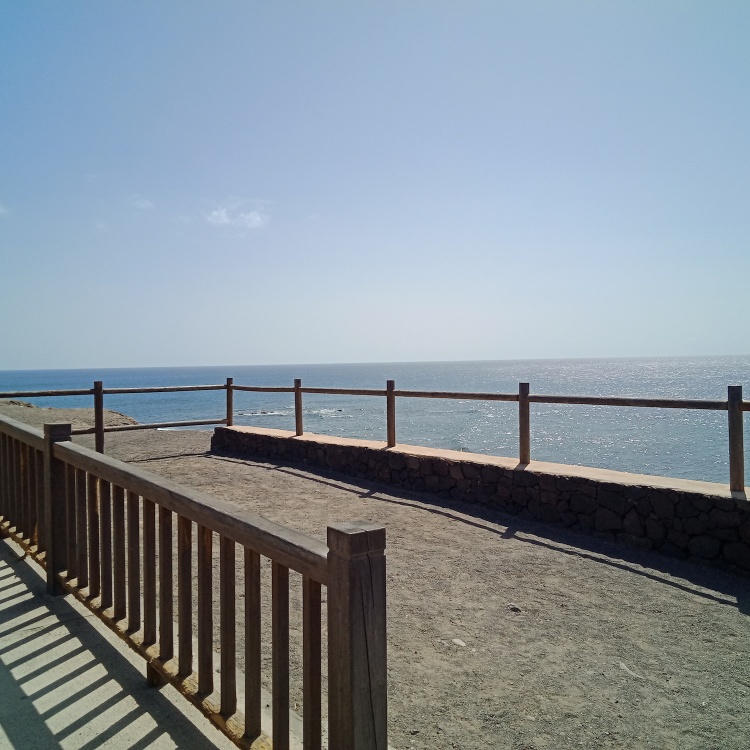 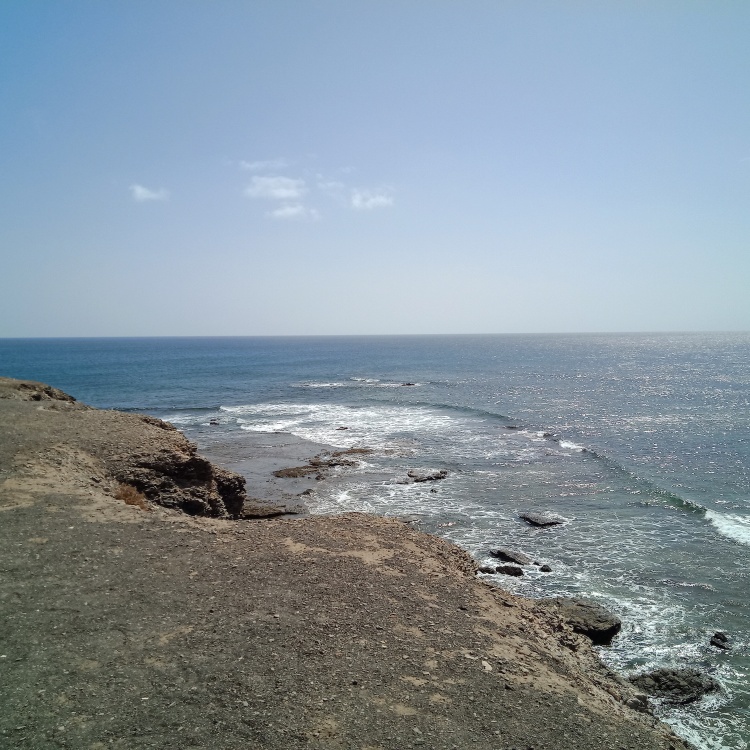 The photo below looks to the west. The following, to the north on the other side of the isthmus. 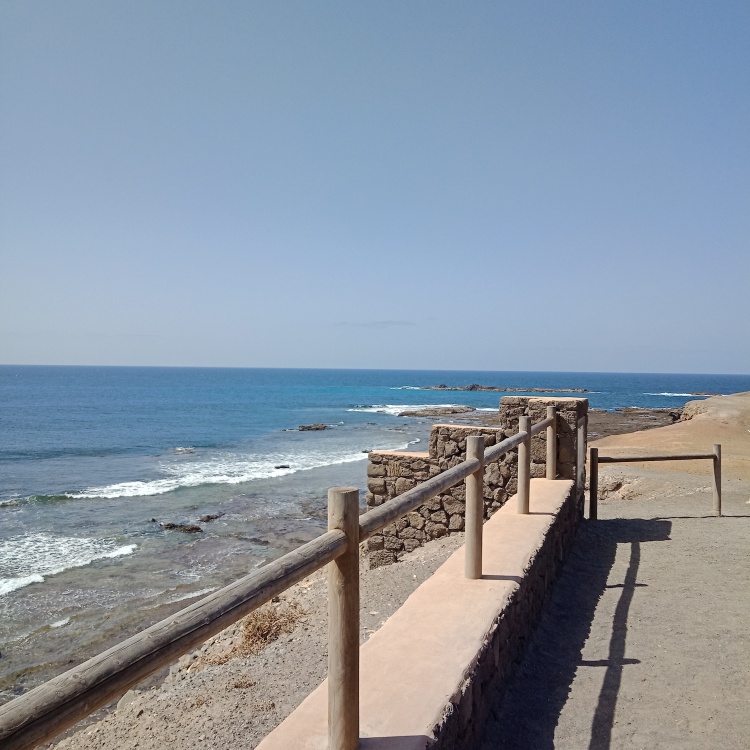 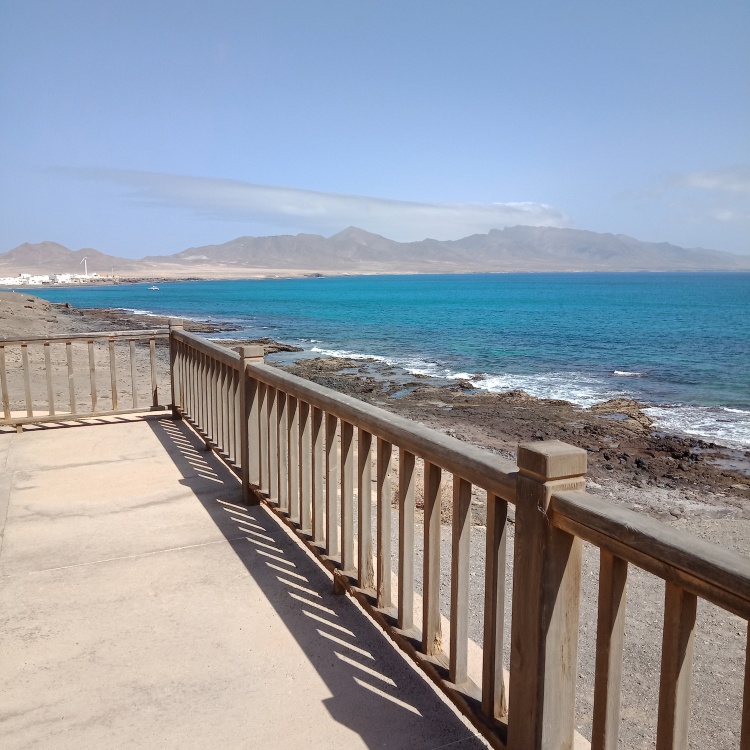 I have tried to capture the magnificence of the view in the following shots. Apologies for my appalling splicing! The ocean was that colour. These photos have not been enhanced. 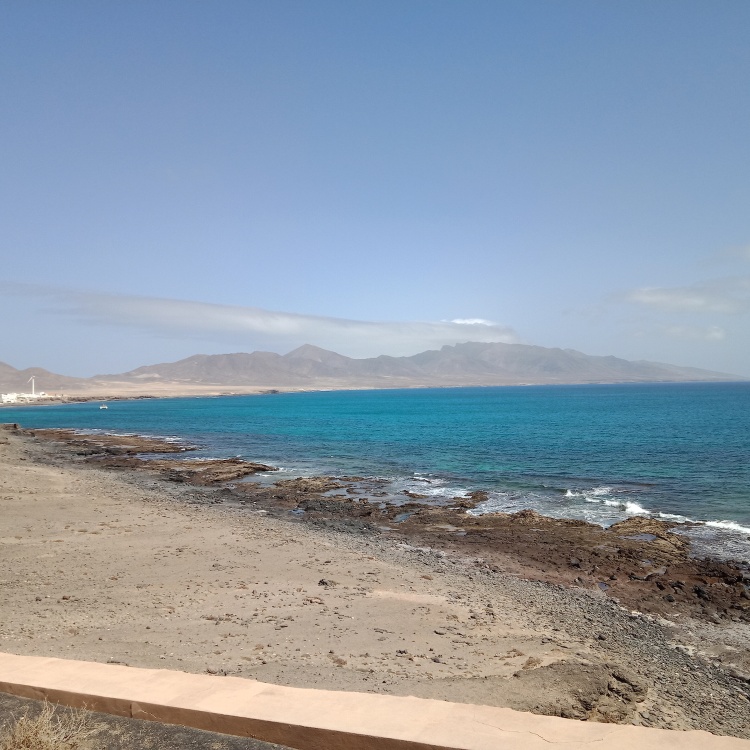 After soaking in the exhilarating atmosphere we headed off, following tradition, to the fishing hamlet of Puertito de la Cruz, which makes a strong statement for its size. Here is all about staying in a highly remote location, the fishing of course, and eating. There is a row of permanent caravans with sturdy annexes which can be seen on the left of the photo below, featuring the outdoor eating of the first of three restaurants. 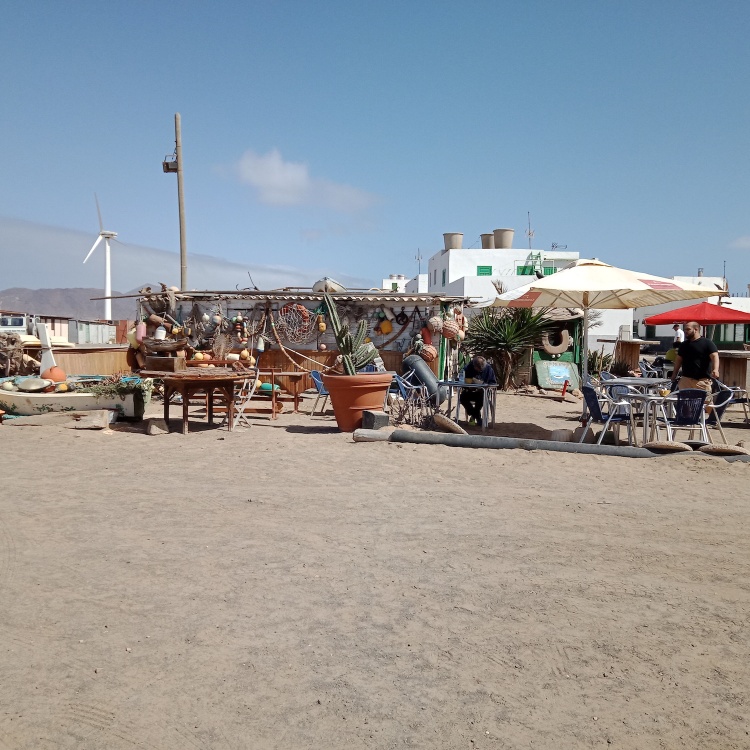 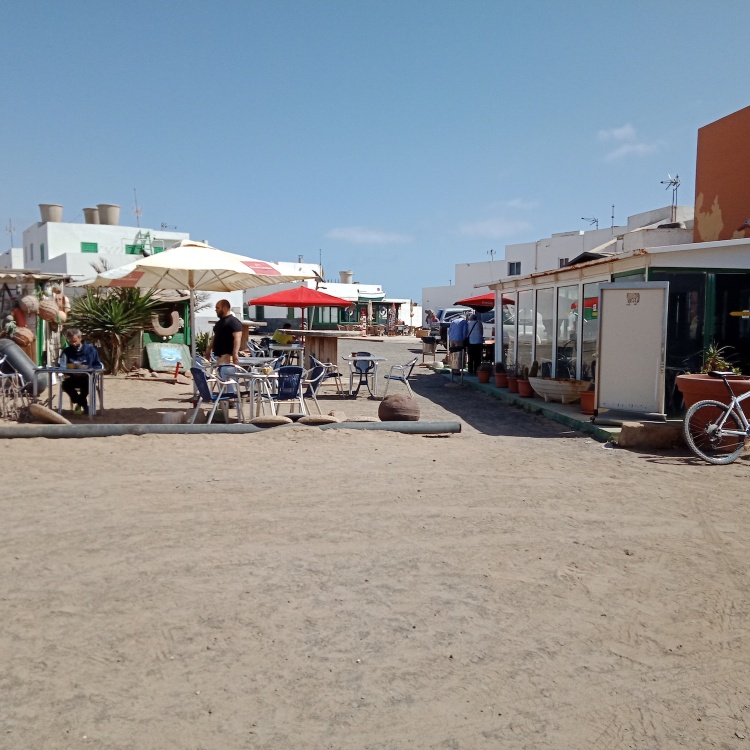 The second restaurant is tucked at the end of the hamlet’s little street. 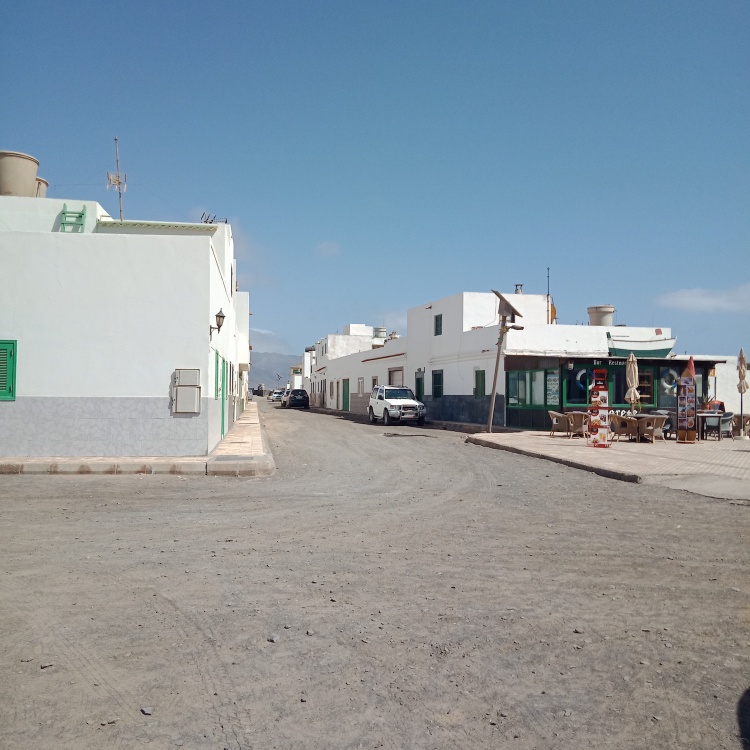 I was amazed at how neat and tidy this little row of holiday houses looked. Must be holiday houses, surely? Surely no one actually lives here permanently? 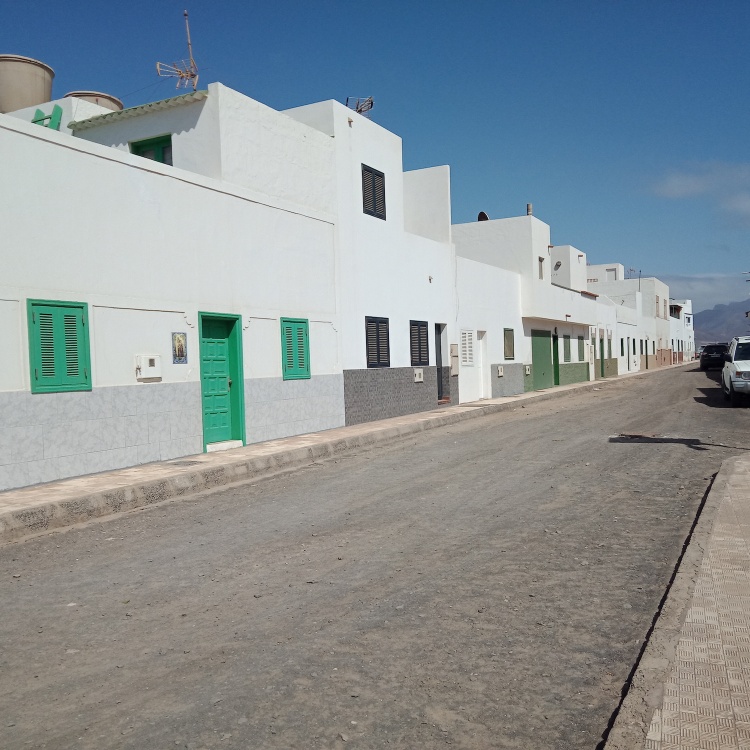 We chose the third restaurant, El caletón, which enjoys the waterfront. Terrific on a glorious day. And here is another sculpture, looking the worse for wear. 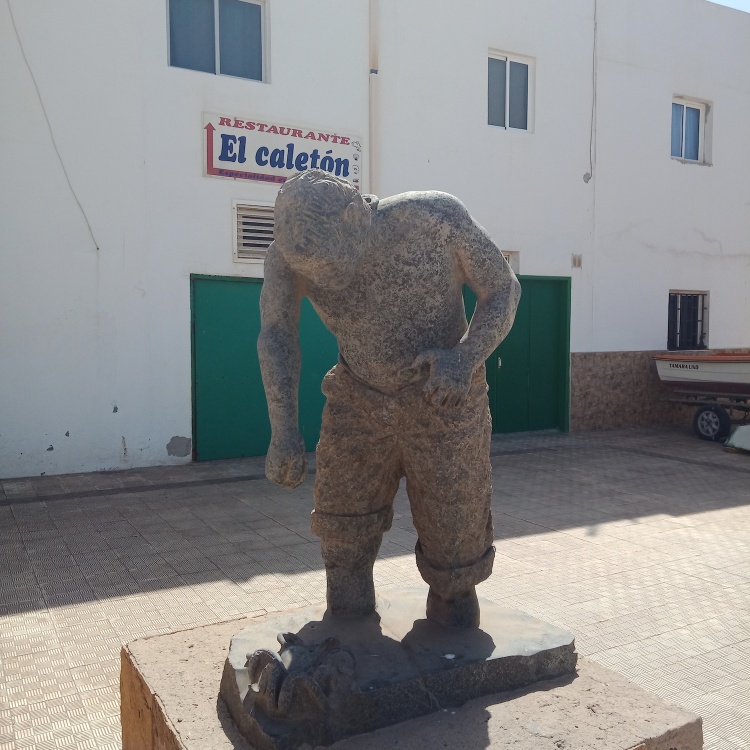 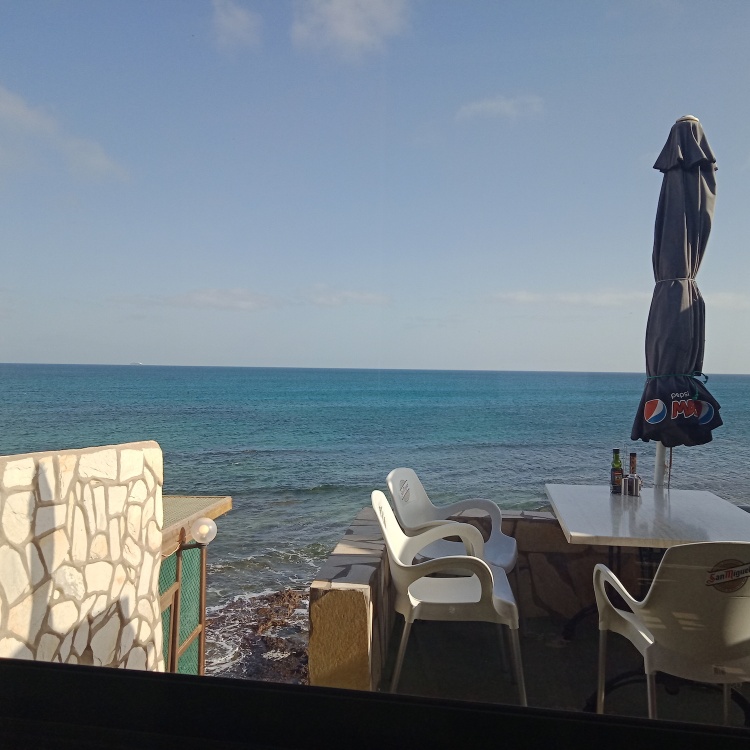 I am not big on food photos. Instead, I chatted with Antonio, the hardworking waiter rushed off his feet. He lives in Morro Jable and drives down to Punta Jandía every day to work. What a commute! 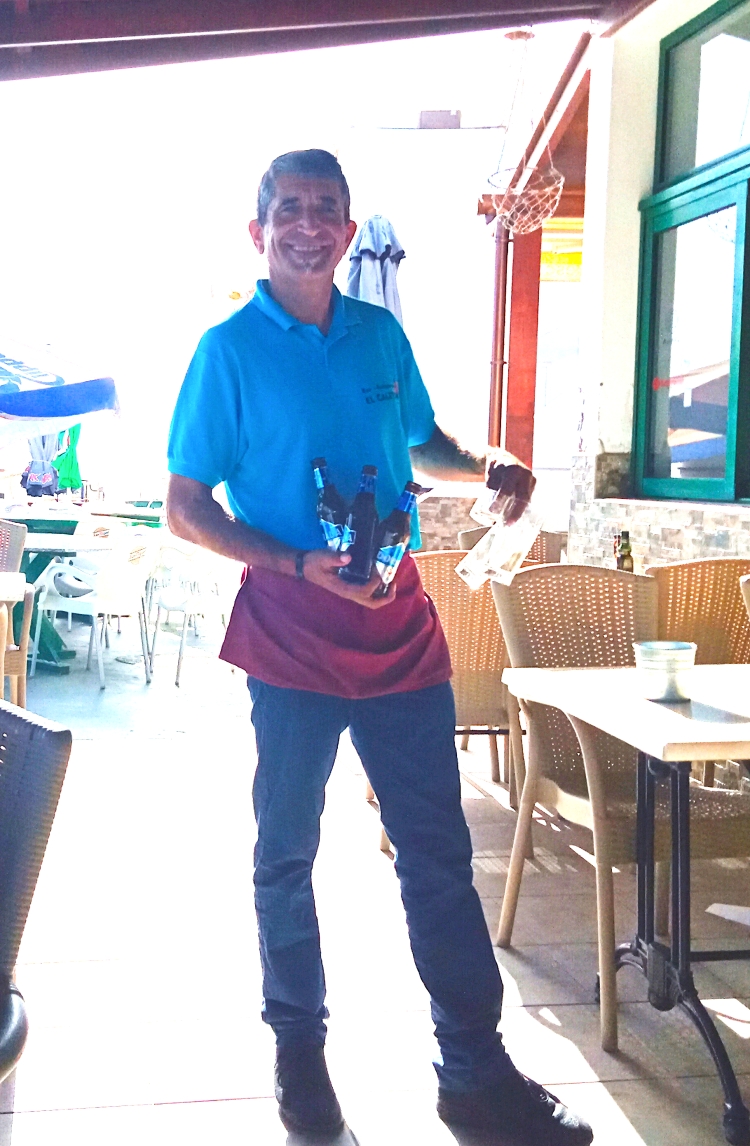 We lingered for what felt like hours before we drove off in search of the old airstrip. We found it – a stretch of level ground about the right width and length for a small plane – and I decided it did not merit a photo. Instead, on the other side of the road, the island’s bottom edge descends in low cliffs that meet volcanic reefs below. The first photo looks west, the next looks east to the lighthouse. 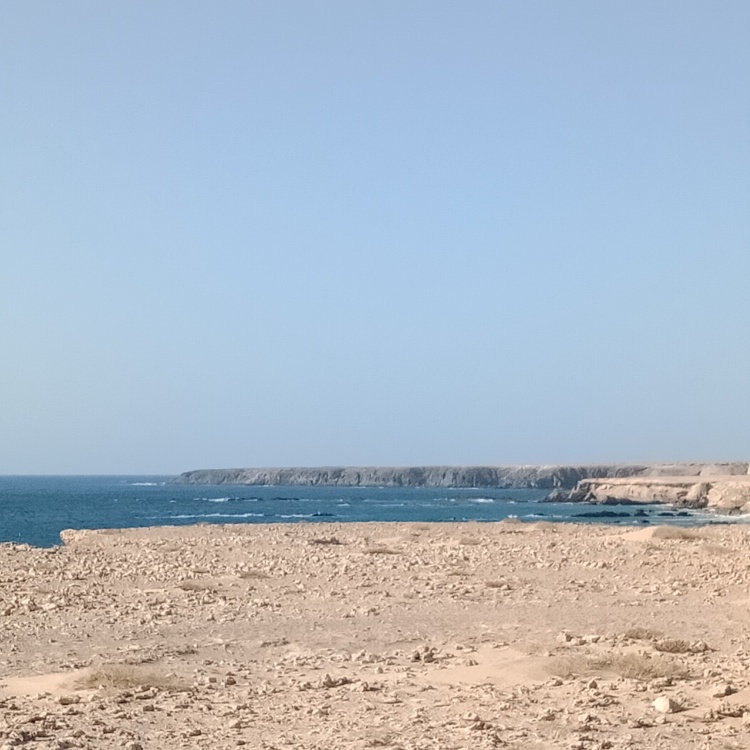 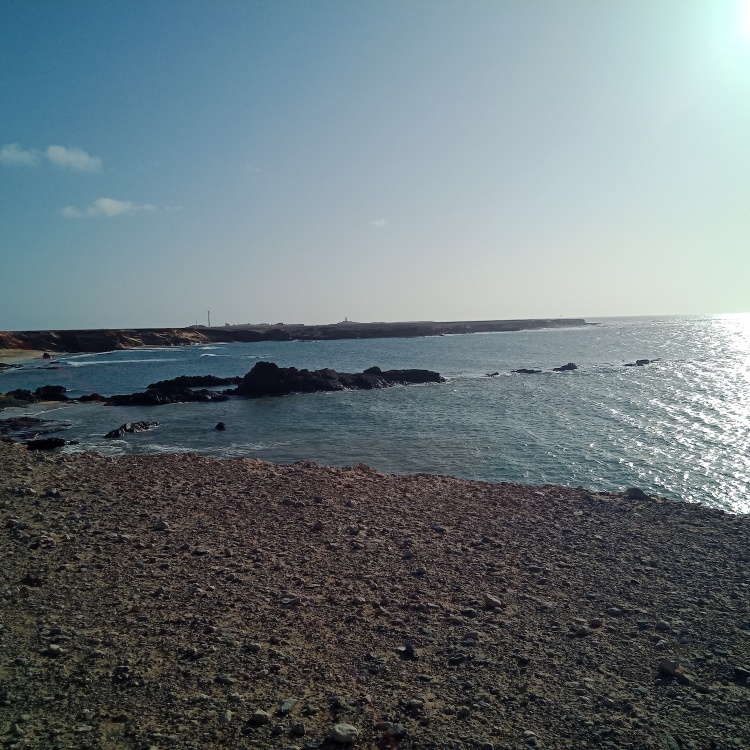 The west coast is dramatic. A portion of a volcanic crater descends into the ocean and there is no way of accessing the Cofete beach beyond. No idea if anyone owns the goats. 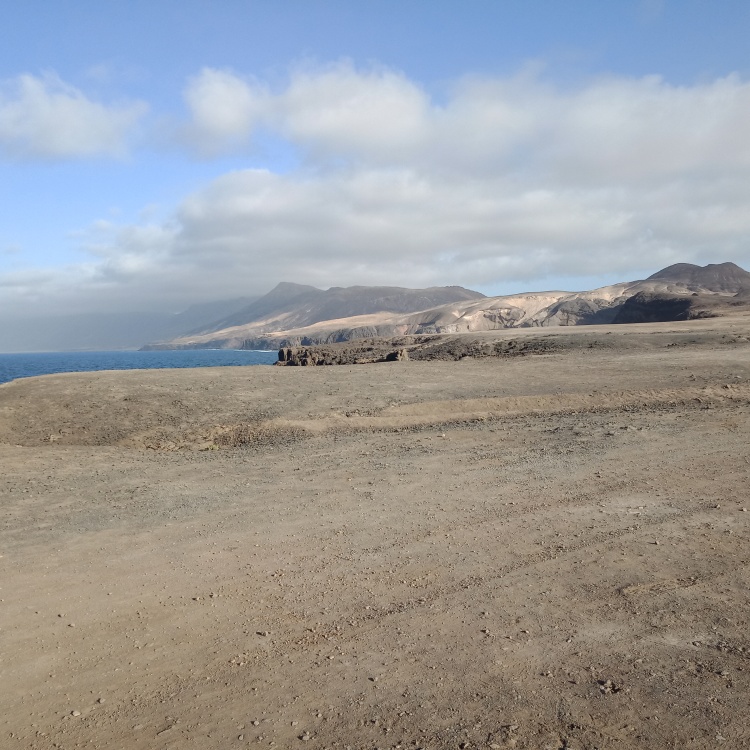 The island’s southwestern tip ends in a door. Why ever not! It is the most extraordinary thing I have ever seen. None of us could decide if it used to belong to a former structure or if it is a sculpture in its own right, standing staunch and proud on its own plinth. 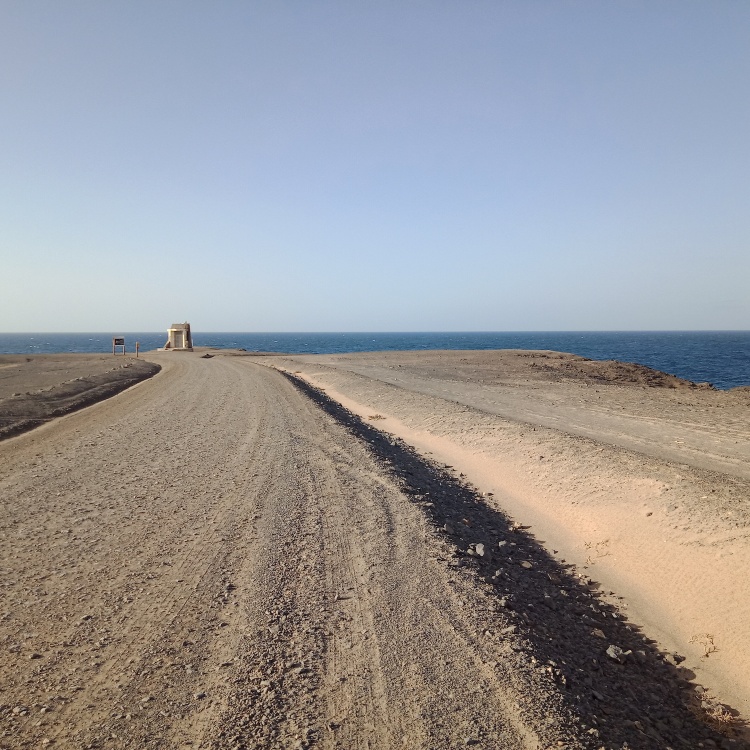 It’s Faro Punta Pesebre – in English, a lighthouse (faro) – or rather, a beacon warning of a danger point. 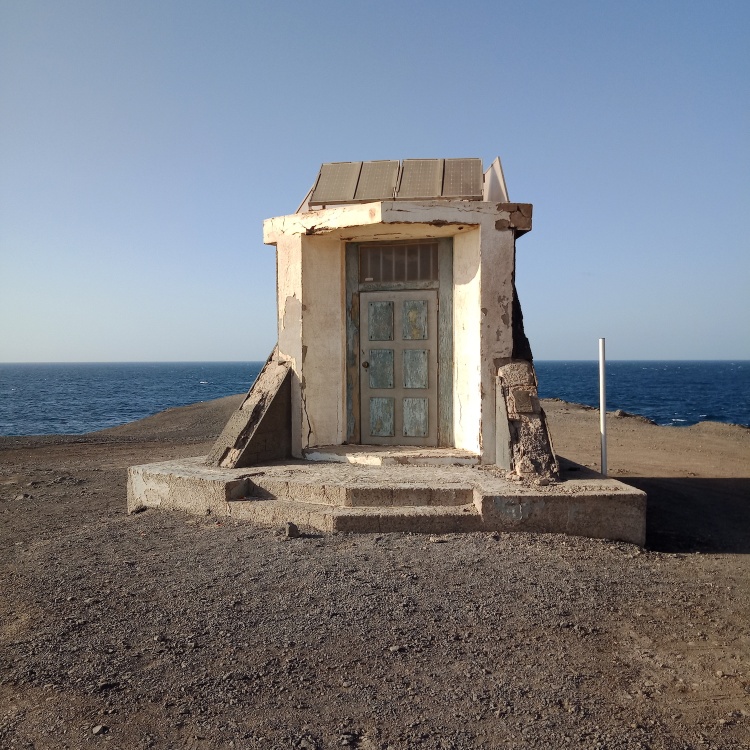 What was obvious, to me and to my day’s hosts Jill and Ian, was here was a place to get truly blasted by the wind. Unlike the gentler if dramatic shores to the east, the Atlantic ocean to the west is deep and dark blue and with its heaving swell it lets you know it would happily take your life if you let it, even on a calm day like this. Seemed like an ideal moment for the all important selfie. 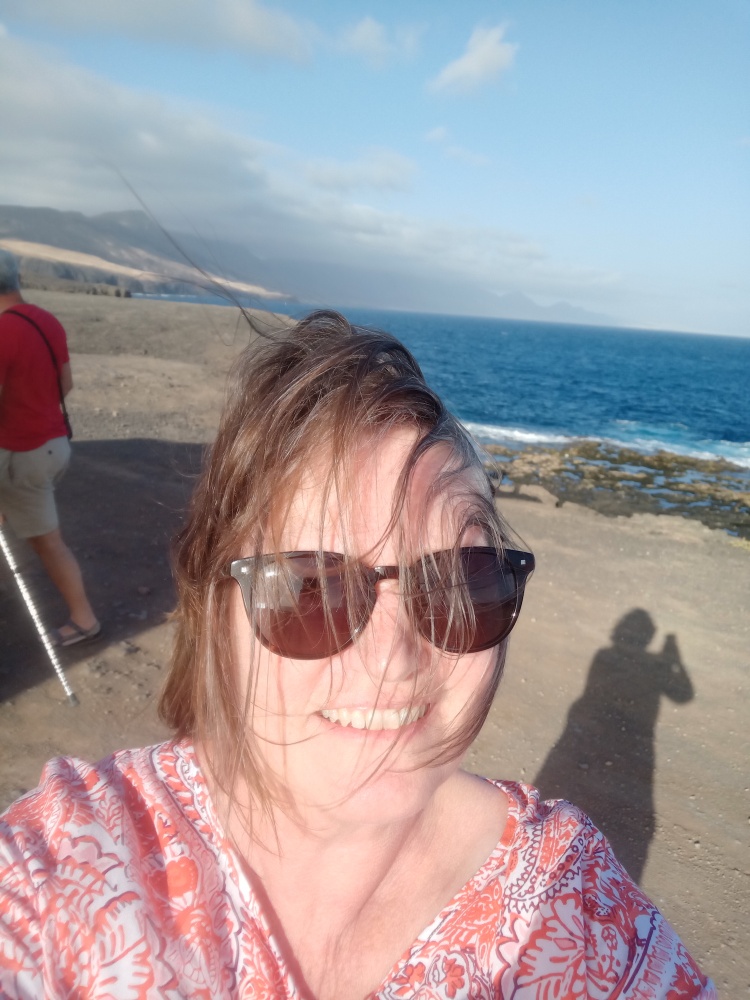 On the return leg – which proved shorter and less confronting somehow, even though we were on the fall side  –  I managed to take one photo to give an impression of the road. I’m not sure I have really captured the full reality as you cannot see the land descending on the other side. You’ll just have to use your imagination.

The whole journey back I thought of Antonio and his commute. 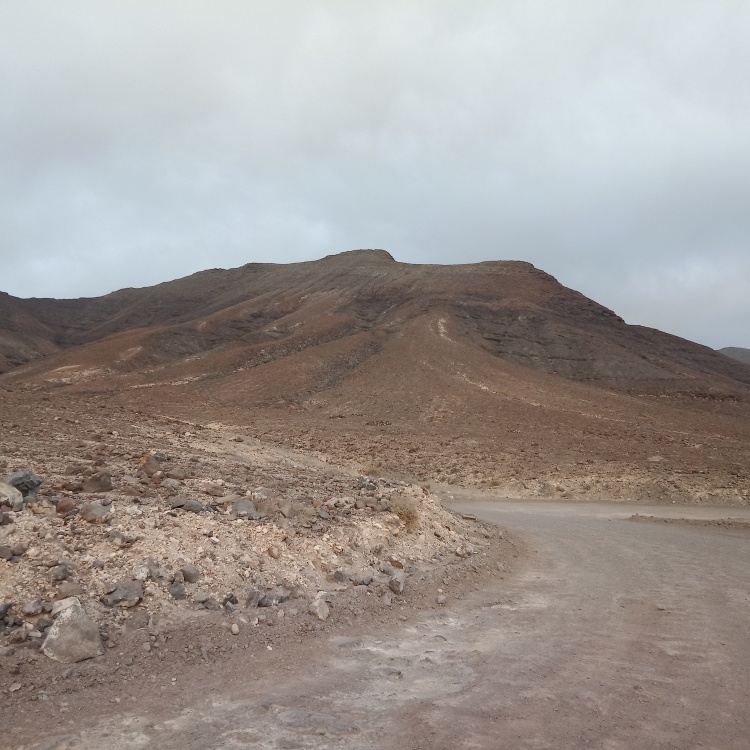 Now, after the richest and most fulfilling holiday of my life, I must return to Australia, starting early in the morning when I catch a bus to Corralejo, then a ferry to Lanzarote, another bus to the airport, and on to Queensland via Barcelona, Doha and Sydney.

Thank you, Fuerteventura! And thank you, all my wonderful new friends.

READ THE REST OF MY  FUERTEVENTURA TRAVEL BLOG HERE HTTPS://ISOBELBLACKTHORN.COM/FUERTEVENTURA-TRAVEL-DIARY/ 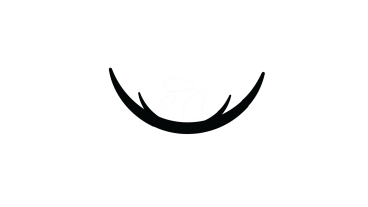 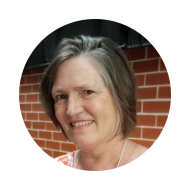 Isobel Blackthorn is an award-winning author of unique and engaging fiction. She writes gripping mysteries, dark psychological thrillers and historical fiction. She is the author of Voltaire’s Garden, a memoir of building a sustainable lifestyle in Australia, and two novels set in Fuerteventura: Clarissa’s Warning and A Prison in the Sun.