With “Twerk”, Isobel Blackthorn has written a suspense novel set in the milieu of strip dancers with a superior mélange of brazenness and subtlety that, in my eyes, would be unattainable for a male author writing about the same theme. I’ll be short about the suspense aspect of the novel: Mrs. Blackthorn knows how to captivate a reader with a tale that is getting eerier with every page. The lust-driven killer in Twerk is a deeply sinister character. Mrs. Blackthorn describes his sadistic nature in scenes that definitely will chill your bones. Near the end of her story, she unveils the reason why this man is so ruthless and scary, and then you realize that the seeds of enjoying the fear, humiliation, and pain of others lie in all of us. Isobel Blackthorn has the gift of weaving tension in a spiral through her novel: she lets it smolder for a while, and then suddenly jumps to hair-raising levels. Afterward, she cuts back a little, only to go full throttle again when you don’t expect it.
But the high-grade suspense in Twerk isn’t the most important ingredient that makes this novel special. It’s the candidness with which Mrs. Blackthorn writes about the way the sex workers of the bar “Hot Foxies” think and feel when they’re dancing seductively around their poles, or about their relationship with their own bodies, and the differences in using sexual power between men and women. In showing the small intrigues, backbiting, and slander behind the podium, where the dancers behave like an extended family, she proves her understanding of the dancer’s lives. I wondered how she had done such thorough research until I read Blackthorn’s daughter Vicky’s Foreword: Vicky is a dancer in a club, and her stories have inspired her mother to write this unusual thriller. I was intrigued by this openness and visited Mrs. Blackthorn’s website where I read under the title “Society, Strippers and Shame” a beautiful and heart-captivating text about how she handled the fact that her daughter chose to be an exotic dancer. I tip my hat for the courage and strength of both mother and daughter, and in my eyes, the authenticity that is tangible in Twerk, making the novel extraordinary, is a result of that courage.
But “Twerk” gives more than a detailed insight in a strip dancer’s life: for a male author like me, it was equally fascinating to read how Isobel Blackthorn dissects the distorted male sexuality in the killer’s character. Blackthorn knows that underneath the virility and macho veneer of the male, lurks manhood’s eternal proof pressure to squash insecurity. I like well-written books that present a reader with more than suspense alone: “Twerk” is definitely such a novel. 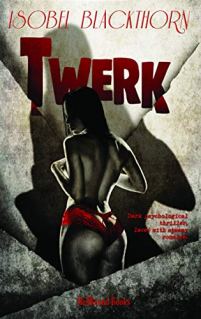 There are almost three stories being told here, two of which were fantastic, and one of which I felt was a drag on the narrative. Although, initially at least, Amber’s story seems disconnected from the main narrative, her POV was far-and-away the most interesting. Part of it is her personality, and part of it is her situation, but it was her chapters that kept me reading.

Lana, on the other hand, is the character we’d expect to be following, a law student by day and stripper by night, who is trying to solve the dual mysteries of what happened to the dead guy, and to where Amber has disappeared. Her role in the story is interesting, and the death threats she receives for her efforts help keep the reader grounded in the consequences of playing detective, but her voice isn’t nearly as interesting as Amber’s, and all the drama she’s dragged into – backstage and social media – becomes tiresome.

It is the third narrator, Lacuna, who really pulled me into the story. Creepy, twisted, sometimes nonsensical, and yet incredibly engaging, I kept wanting more. I had my ideas, my pet theories as to how Lacuna fit into things, but was still amazed at where Blackthorn took the story. The chapter on the town’s history, the revelations about one character’s genealogy, and the transformation of another character from victim into monster, was one of the best parts of the book. It’s where we see things come together, and begin to understand all the connections, although there are still surprises – violent, bloody surprises – to come in the climax.

Twerk wasn’t quite what I expected, and it’s probably better for it. It’s a dark, violent, sometimes romantic thriller, with some interesting insights into the human side of adult entertainment, with one of the best villains I’ve come across in a while. I’ve seen some reviewers complain about motivations, but I completely get them. Besides, madness is a motivation all its own.

Books From Dusk Till Dawn

This book sizzles from the start as it joins the ladies of the sleazy Las Vegas strip clubs, well one, where girls can get rich and men are eager to part with cash just to be near them. No touching gentlemen please! Oh, there are the regulars who have their favourite girls, which is almost seen by them as some sort of relationship but making a buck for these girls is putting some through college and others healthy real estate investments, if they have their head screwed on that is!

When one of the clients suddenly dies at the club, a paramedic is soon on the scene. Now women as well as men have needs and Amber maybe a stripper making good money but she doesn’t play round with the clients, but a real fit paramedic well that is different.

This is one real hot story in every possible respect. There is a super build to the actual story as the author describes the workings of the club. I was pretty fascinated by it all. I loved hearing the girls thoughts as they worked, as they drifted away from what they were doing in their minds. Their aching backs and knee problems from working the poles and stage. Now lots of these girls have come to Vegas with higher hopes for better things, with their families thinking they were in different work. They often lived on their own and to be honest who would miss a stripper? Realistically only a weekly call home to mom being missed or the absence of missing a shift at work.

The story follows Amber the most, over about a week. The journey isn’t for the faint hearted. It is brutal, cruel and absolutely petrifying. Each new event more shocking than the one before. The story is told from varying view points, Lana, stripper by night and law school student by day, is Amber’s best friend at work, and the only concerned person about missing Amber. So out she comes pushing the police and the club owner about the dead client and Amber.

If this was a film I would be watching behind fanned fingers over my squashed up eyes. It is a cracking story line, you just have to get to the end to find out the what, why and who! This will stay in my mind for three reasons. The title is perfect, the book cover fabulous and the story an absolutely corking dark psychological thriller.  So read if you dare but be warned it does contain triggers.