Day 6 and my awe and delight at having returned are replaced by an acute awareness. Here are some of my observations.

Lanzarote is an island of contrasts. The everyday lives of the locals, with their tight knit family networks, their lives lived behind closed doors, and the tourists. Like almost all tourist destinations where the industry has planted itself in amongst a local culture and boomed, the people and their traditions, their culture, seems squeezed aside. At times tourism manifests like a sycamore in a foreign land, a eucalypt in Africa, a cane toad, a feral cat. Tourism, in essence temporary migration, fostered and serviced by a corporate edifice with no conscience.

I wonder, do the locals here hide? I would hide. I would be pleased the windows of my house faced an interior courtyard and not the street outside. For the island feels overrun. Only in the backstreets of the remotest villages, or the suburbs of the larger towns, can the people escape the invasion. The roads are busy, and anywhere remote is frequented by the more adventurous tourist, especially the cyclist.

It’s an impossible situation, on a small island formerly poor with a struggling economy, a backwater passed over in favour of it’s more stately sisters. Now the economy is dominated by tourism, and, just like Ann observed in The Drago Tree, there is no going back to the old days. 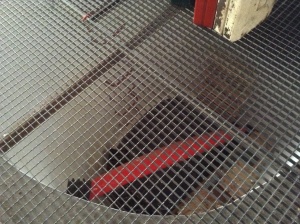 Thankfully on Lanzarote much care has been taken to preserve the island’s natural beauty spots. The malpais (lava) making it difficult to develop large areas, especially in the north. And the artist, architect and ecologist Cesar Manrique set an example of how to cater to tourists without ruining the environment, one followed by many, those respecting the island’s status as a biosphere reserve.

Michelle and I have spent the last few days witnessing the tourist-local dynamic. On remote, winding lanes, we’ve been almost side swiped by cyclists riding two or three abreast. We’ve walked the gritty paths in the island’s hidden corners, only to find others passing us, heading off and up and round and every which way.

We’ve hung out in a bar in the main drag of one of the island’s quieter tourist strips, and spoken with a group of English expats, all of them warm and friendly. They are aspiring writers, and I was giving a talk. I was one of them, in my heart the same desire to live on Lanzarote. I can’t criticise their wish.

We’ve hung out in restaurants in the north frequented by locals and a few tourists, and we’ve enjoyed the exceptional service, the generosity.

We’ve walked through Manrique’s extraordinary house in Tahiche, created in a lava tube accessed by several small jameos (holes in the lava). An artist inspired by Gaudi and Picasso, his creative impulse evident in every corner.

We’ve been to the artesan market in Haria, and wandered around the backstreets, passing couples also wandering around. I was showing Michelle where I used to live. And we were on the hunt for an old friend, Domingo.

We found him in his house on the edge of the village. I hadn’t seen him for twenty-six years but he’s the same. And our affinity for each other’s company was just as I recalled.

For the first time since we arrived, I was forced to speak only Spanish. We were talking about the past, about our lives, about the future. How I could live here again. With a good internet connection I most certainly could. And then, what would I be? An expat, an English-born Australian author championing the values, the hopes, the dreams of others. A stranger.

No. I’ll have to leave the characters I created in The Drago Tree to live that life on my behalf.