What can be said about driving down a narrow road carved through a lava plain, a road that goes on and on and on? The basalt that covers the land in every direction, thick, crusty, alive with lichen. Volcanoes or calderas 500 metres high and about 1 or 2 kilometres in diameter, rising up like cone-shaped boils, some black, others brown or red. Then there are those calderas burst open, serrated at the rim, splayed where their lava spilled to scour the land. 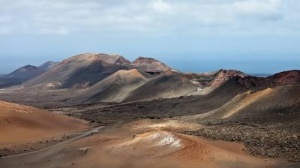 Everywhere you look on the island, there they are, some ancient, some young, the roads on Lanzarote coursing paths between. 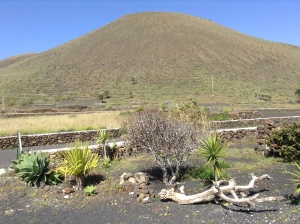 The eruptions of Timanfaya that took place in the mid 1700s and lasted for 6 years, have resulted in a landscape not of this world. A spreading mass of impenetrable rock, about 15 kilometres wide and long.

These volcanoes emerged in fissures in the land, once a wide plain perfect for grazing. Fissures bleeding rock, cleaving open as the pressure of the volcanoes beneath forced their way above ground. This is what I have read and imagine, a primordial groaning, perhaps deafening, definitely terrifying, apocalyptic. Livestock asphyxiated, fish boiled alive, the ocean steaming, the island showered with volcanic ash and smoke. You have to know all this, to appreciate the place as it is now. But it is still impossible to take in.

The speed limit of 50 kmh is too fast. We crawled along, fascinated, not wanting to reach the end of the road.

We went to where the lava met the ocean. The road snaking along, embedded in the lava, right beside the water’s edge. 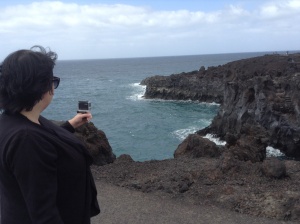 We parked at Los Hervidores, a site of extraordinary beauty, where narrow basalt paths have been created to allow tourists to get close and see that meeting of rock and water. The basalt is many metres thick, chunky, descending in a vertical cliff. The ocean swells and surges, blue on black, sending forth its spume. There are holes in the lava, like wells, places to get soaked when the ocean is angry.

No one speaks. The wind, that other element, blows and blows. You either get used to it, or you leave Lanzarote behind for another clime. I love this meeting of the elements, all of them present, in the wind, the ocean, the rock born of fire. Lanzarote is a powerful place, unspoiled, a place to be revered. And as Ann found in The Drago Tree, every tourist slips into reverence in the face of such a setting.