The penultimate day of our stay on the island proved to be intriguing.

Our first stop was Arrecife, the island’s capital famous for it’s warren of narrow streets. Until this day we had taken the ring road, avoiding the confusion. This time, on a mission to deposit copies of The Drago Tree at a book shop near the Castillo de San Gabriel, we had no choice but to enter the fray.

Somehow we found our way to the Cabildo, on the southern end of town, an impressive modern building constructed in Spanish colonial style and surrounded by car parks. Not wanting to re-enter the warren of streets, we parked and walked the promenade back to Calle Leon y Castillo. 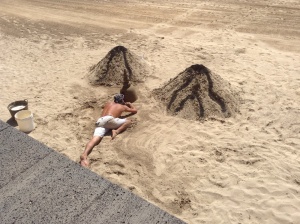 The day was sunny and warm and it was a pleasant walk, first through a neatly laid out cactus garden fringed with low stone walls flanking the sea, and then around the creamy sands and sapphire waters of Playa Reducto – my kind of beach too, shallow and still. There were couples, old and young, women with strollers, the people of the city walking leisurely, relaxed. It’s a vibe you lock into, immediately.

Once past the 5 star Gran Hotel, the promenade continued on to Castillo de San Gabriel. Here, major road works impeded the flow of our walk, but the view of the old fort and the shimmering sea drew our attention.

We found the Libreria El Puente, down a side street off Calle Leon y Castillo – Arrecife’s main thoroughfare – the owner happy to take our remaining copies of The Drago Tree, to sell on our behalf.

By now it was lunch time. We had to eat. After walking around a number of side streets, passing eateries either uninspiring and notably empty, or exciting and predictably overflowing, we ended up back at the bookshop, and the restaurant next door. A small, friendly affair, with original paintings for sale on the walls and fried rabbit on the menu. Irresistible.

I imagined intense conversations between leftist intellectual types over salami and hard cheese. And I wondered at who the two men were who ran the joint and whether they were really from Andalucia. I doubted it.

We ambled over to the old fort along a narrow causeway, pausing at the old drawbridge for photos, staring down into the tranquil water, watching a woman taking advantage of the warmer shallows and edged by basalt walls, little beaches, pebble strewn, appearing unexpectedly. 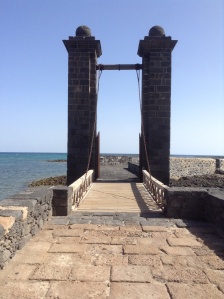 The fort was closed. So we posed by the cannons, had a snoop around and strolled back along the other causeway. I told Michelle I thought I could rent an apartment in Arrecife, one facing the ocean, and write a book or two. Something about the vibe of the city aroused me. Maybe all those narrow streets filled with secrets.

We stopped for gelato near the Gran Hotel. By the time we reached our car it was 4pm.

Perfect timing for a drive to Famara. I wanted to provide Michelle with a contrast.

It took about 1/2 an hour to drive across the belly of the island. And there we were facing north, with the cliff of El Risco towering to our east, the low rollers pushing in the tide. So we walked along the beach, pebbly and not so easy on the feet (I had rather stupidly chosen sandals for the outing), and kept on heading east, hoping that the lower the sun, the less cyclists would be on the roads when we headed back to our farmhouse in Maguez. On and on we went, in no hurry to turn around. Then Michelle stopped and asked me if I wanted to continue. I said I didn’t care either way but sensed she wanted to head back. As I turned I saw a man, naked, heading our way.

His speed was greater than ours. I turned back a few times, to admire the cliffs, say adios, or hasta luego, and there he was in all his glory. So I said to Michelle, ‘He’s spoiling my view.’

‘Complete with his semi,’ she replied.

I have to admit it took me a while to connect his half-erect penis jutting out like those of the male figurines that sometimes appear above male ablutions, or indeed abound in my friend Domingo’s studio, with her comment – semi.

We laughed all the way home. I was still wiping away the tears as I set about making cauliflower soup. (We’re down to using up the scraps of the groceries we’ve been buying from the local supermercado in Arrieta. Tomorrow is chorizo day. Don’t ask.)

Michelle is happy to report that we walked 16,000 steps today. She has an app. What the app doesn’t say is that they were all steps of contentment.