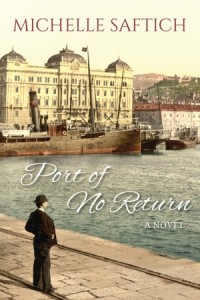 There are stories that need to be told, stories sidelined, destined to languish on the periphery of our knowledge of history, stories eclipsed by bigger, more sensational stories. Until an author like Michelle Saftich comes along.

Port of No Return is a work of historical fiction, set at the end of WWII, which tracks the stories of four families as they flee their war-ravaged city of Fuime, Northern Italy, for the refugee camps in nearby Trieste, as communist Yugoslavia, under the command of General Tito, claims ownership.

Saftich leads the reader by the hand into the intimate domestic lives of Contessa and Lena and Bianca, and Ettore, Edrico and Roberto, with all of their children, and of course Nonna. Their homes are bombed, their lives under threat. When Fuime was under German occupation, many locals were required to work in the arms factories. The Partisans created lists of the traitors. When they seized control, those men were rounded up and shot, or imprisoned and tortured, and then shot. It’s a familiar story. I’m easily reminded of current times in Syria and Iraq. And to that end alone, this book is an important read.

And as we face a refugee crisis second only to World War II, in Port of No Return Saftich depicts the struggles of millions of refugees displaced across Europe and the challenges they faced finding a place, any place, to live.

The hunger, the awful conditions, and the waiting, endless waiting, are portrayed through the eyes of the characters as they scratch out a day to day existence. It is a story in which hope and despair vie for supremacy.

Saftich portrays her characters with sympathy and sensitivity in confident, down-to-earth prose. The narrative is well-crafted and well-researched. Port of No Return is a story of survival, of hope, of the tenacity of those Italian families determined to have a future. And through it Saftich opens our hearts to compassion, a commendable feat.

3 thoughts on “Port of No Return by Michelle Saftich”