It’s funny, the places a writing project will take you, especially when the project is historical fiction. Last week I visited the State Library of Victoria. I wanted to view the building, explore the library and talk with librarians. I didn’t allow sufficient time. I needed a whole day.

To start my little tour, I went to stand by the statue of Victoria’s first governor. Charles La Trobe is a member of the aristocratic La Trobe-Bateman family. He and his cousin, book illuminator and garden designer Edward La Trobe, both came to Australia in the 1800s, while the rest of the family remained in Britain. It was Charles La Trobe’s idea to have a public library built in Victoria. His statue depicts him in glorious fashion, the sculptor obviously wanting to appeal to the governor’s vanity. Other artists have been less kind, as can be seen on the front cover of his newly published biography, LaTrobe:traveller, writer, governor,  composed by John Barnes, Professor of English at La Trobe University. 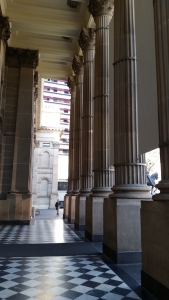 From my vantage beside the statue I took in the library in all its grandeur. It’s impossible not to be impressed with the building, designed by Joseph Reed in Roman Revival style. It was officially opened in 1856, although not in its current form. The building is constructed from Tasmanian freestone, replete with rounded arched windows, and Ionic fluted columns on the portico. I admired the checkerboard tiled floor, which seemed to mirror the chess games being played, large scale, out on the grounds.

Inside, the library was filled with readers. Most had their heads bent over a book. The cavernous room absorbed much of the sound but the room lacked the hushed quality I was looking for. I headed straight on through to admire the Redmond Barry Reading Room, a later addition to the original building. There too, every desk was occupied, but readers were more subdued and the magnificence and architectural uniformity of the mezzanine, and the glass-covered atrium, seemed to quieten the spirits. Here was not a room to rush around in, and my own footsteps on the polished wooden floor seemed overly loud! 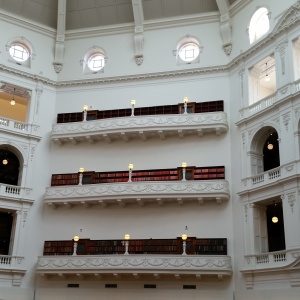 I went next to the La Trobe Reading Room, my final destination, and where I sat for quite a while. The room felt higher than it was wide. Octagonal in shape, all the desks radiate from a central podium like spokes of a wheel. There were far fewer people about. I wondered if that had anything to do with the more austere atmosphere and less comfortable seats.  My photos, taken on my phone with the permission of security, scarcely do the room justice. I took strange angles as I was after images I could later use for descriptive purposes. Besides, I am not a photographer.

I didn’t want to take photos. It felt wrong. Instead, I wanted to go up and explore the books on the balconies. I wanted to run about, my head appearing in all those arches. I wanted access to all the parts of the building closed off, sometimes padlocked as if to stress the point.

I reigned in my urges and went back to the information desk in the first room. There I introduced myself to the librarians. What a fine complement of staff the library has! I made some inquiries and was given vital information for my book. Now I have more questions. I might do a guided tour and see if that gives me access to some secret places. Whatever the case, I shall return.