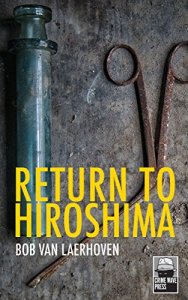 About Return to Hiroshima

Xavier Douterloigne, the son of a Belgian diplomat, returns to Hiroshima, where he spent his youth, to come to terms with the death of his sister.
Inspector Takeda finds a deformed baby lying dead at the foot of the Peace Monument, a reminder of Hiroshima’s war history.
A Yakuza-lord, rumored to be the incarnation of the Japanese demon Rokurobei, mercilessly defends his criminal empire against his daughter Mitsuko, whom he considers insane.
And the punk author Reizo, obsessed by the ultra-nationalistic ideals of his literary idol Mishima, recoils at nothing to write the novel that will “overturn Japan’s foundations”….
Hiroshima’s indelible war-past simmers in the background of this ultra-noir novel.
Clandestine experiments conducted by Japanese Secret Service Unit 731 during WWII are unveiled and leave a sinister stain on the reputation of the imperial family and Japanese society.

I have a healthy appetite for noir fiction and found Return to Hiroshima a sumptuous and wonderfully grotesque feast. Centred in Hiroshima and written for a Western audience, Van Laerhoven paints a vivid and dark portrait of Japan, its culture and society, and an equally vivid and dark portrait, both immediate and fifty years on, of the aftermath of Little Boy – the atomic bomb that fell on Hiroshima on August 6th, 1945.

Through the eyes of a diverse cast of characters, the reader enters a deep-state reality, shadowy, deceptive, peppered with lies and brutality. The author slowly reveals in short sharp chapters, the twisted and corrupt interplays at work behind the scenes as Japan endures a cataclysmic economic crisis. The novel is set partly amid the abandoned high rises built atop the coal mines of Hashima Island near Nagasaki, where Mitsuko wrestles with the reality she is forced to endure, dominated by her monstrous father and mafia-boss, so-called Rokurobei. She escapes to Hiroshima and forms a friendship with Yori, whose drug-crazed and maniacal boyfriend, Reizo, is at work on his novel in a squat in a disused warehouse.

Soon, the reader meets German photographer Beate Becht, Belgian graduate Xavier Douterloigne and maverick police inspector, Takeda. Each shines a spotlight on Hiroshima, and each is of course instrumental to the plot. What unfolds is on one level a straight ahead race to save Mitsuko from danger and reveal hidden truths. On a deeper level, Return to Hiroshima challenges authorised versions of events and their causes and perpetrators, those versions reported by the press.

Superbly written in an easy, fluid style with characters that are complex and believable, Return to Hiroshima contains a taut and artfully constructed plot. The reader is kept on edge. At any moment the tension will release. Eventually it does, dramatically yet incrementally, intertwined with revelation upon revelation, carrying the reader through to the last page.

While there are a few confronting scenes in this novel, with various victims meeting their awful ends, the ultimate victim in Return to Hiroshima is truth, at once laid bare by the narrator and distorted by the characters. Driving the plot are themes of memory and remembering, childhood trauma and unhealed wounds. Gruesome mutations caused by the atomic bomb are set alongside those caused by secret medical experiments. In all, Return to Hiroshima is an elaborate and insightful depiction of obsession.

Younger readers may not recall the sarin attack in a Tokyo subway that took place in March 1995, and the religious cult, Aum Shinrikyo who claimed responsibility. They may not know of Unit 731 and the atrocities the Japanese meted out in WWII on their prisoners of war, atrocities ignored by the West as we focus all our attention on the Nazis. Cruelty is a global phenomenon, then as now. In addressing this, Return to Hiroshima and its author deserve to be acclaimed.  An intelligent and compelling read.

Find a copy of Return to Hiroshima on Amazon