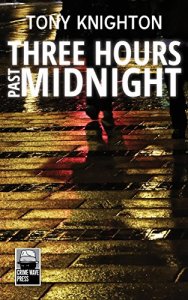 About Three Hours Past Midnight

His last job a disaster, a professional thief teams with an old partner eager for one last score – a safe in the home of a wealthy Philadelphia politician. But they are not the only ones set on the cash.
His partner dead and the goods missing, he hunts for his money and the killer only to find out whether this may have been a job best left undone.

The title alone, ‘Three Hours Past Midnight’, a reference to Johnny “Guitar” Watson’s 1956 Blues classic, will flag the sort of book this is. The track could just as well be playing in the background throughout the whole story, a backbeat that echoes, even amplifies an ever-present gritty urban vibe.

The reader dives straight into the action as an unnamed professional thief accepts an impromptu job from an ex-cop, George, who has stage 4 cancer and wants to leave a little extra for his wife. When the theft of a safe from a high-profile politician goes belly up and George is shot, the narrator goes on the hunt for the culprit. Only, he soon discovers he is also being hunted. What unfolds throughout that night is an edge-of-seat ride filled with action, menace and intrigue.

Social realism in Three Hours Past Midnight is strong. Philadelphia’s underbelly of corruption and organized crime is laid bare, noir-style. The point of view is narrow, focussed, sharp and Knighton’s prose is confident, taut and economical. The author sucks the reader right into the narrator’s reality. An atmosphere of urgency and justice, or the lack thereof, pervades every page. There is a touch of Hemingway and Chandler in the writing. The plot and pacing are excellent and twists come bang on cue. Knighton crafts his supporting characters deftly, slotting in enough to give an impression, the reader’s loyalty always kept firmly in the narrator’s pocket.

In all, hard-boiled noir thrillers do not come any better than this.