When a young black man is lynched in a small Alabama town, his estranged father — a crime world enforcer — sets out for revenge, embarking on a blood – soaked journey that will leave the ravaged bodies of dead Klansmen in his wake.

“Rausch unleashes a flurry of gut-punches both painful and thrilling, his prose brimming with righteous anger and stark, no-bullshit wit. This racially charged and crackling tale reads like a startling mash-up of Jim Thompson and Iceberg Slim, making Bloody Sheets that rare achievement: hardboiled and hard-hitting, but transcendently heartfelt as well.”

I had no idea what to expect when I opened this novella and I was pleased to find good strong prose and a no-holds-barred style laced with acid wit. A raw, straight ahead vengeance tale for fans of pulp fiction, Bloody Sheets is grit on steroids. Enter the deep south of the United States, a small-town in Alabama riven with racism and hatred, a location where the Ku Klux Klan are strong and active. When a young couple in love defy local mores – she’s white, he’s black – a father seeks revenge and calls in a favour from ex-con Coke. What unfolds will take your breath away and be warned, this novella is not for the faint of heart!

Bloody Sheets is a fast-paced, one-sitting read, with witty and sharp dialogue and graphic scenes of extreme violence. The title is apt and metaphoric, the story strong on setting. Rausch even manages to endear his badass hero to his readers and provides a stark portrait of racial hatred and its inevitable consequences. I loved the final twist.

Not exactly a morality tale, but there is enough in Bloody Sheets to make you pause and think. 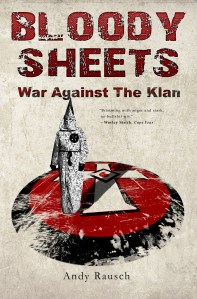 Andy Rausch is an American film journalist, author, screenwriter, film producer, and actor. He is the author of several novels and novellas including Elvis Presley, CIA Assassin. He also wrote the screenplay for Dahmer versus Gacy and is the author of some twenty non-fiction books on popular culture. Books: Riding Shotgun, Bloody Sheets, A Time for Violence, Layla’s Score.

You can usually find Andy on Twitter @writerrausch1, and he maintains a blog at https://authorandyrausch.wordpress.com/

Grab your copy on Amazon

Isobel Blackthorn is an award-winning author of unique and engaging fiction. She writes dark psychological thrillers, mysteries, and contemporary and literary fiction. Isobel was shortlisted for the Ada Cambridge Prose Prize 2019 for her biographical short story, ‘Nothing to Declare’. The Legacy of Old Gran Parks is the winner of the Raven Awards 2019. Isobel holds a PhD from the University of Western Sydney, for her research on the works of Theosophist Alice A. Bailey, the ‘Mother of the New Age.’