Feeling energetic this morning, I set off for Playa Chica, the lovely beach in the Los Pozos quarter of Puerto del Rosario. It was about 10am and the cool northerly wind aside – which had caused locals to don jumpers, jackets and even scarves – the day was glorious. The first evidence that it would be a different sort of day to when I last had a ramble about town was when I passed a few stout elderly couples with backpacks, obviously not knowing where they were going.

The pavements were definitely not my own. There were more of them as I neared the central square. Then, a swarm exited the side door of the Our Lady of the Rosary church. Last time, although the church had been open, I did not enter as it was almost empty and I had no idea if the two women inside were worshipping. It seemed wrong to barge on in. This time, since it was so obviously overrun, I went in and sat on a pew.

I tried to imagine what it would be like as a place of worship with its vaulted ceiling and huge wooden doors, and its modest if absorbing altarpiece, but there were too many tourists to get any sort of spiritual vibe. I didn’t linger long. I was thinking since it was Carnaval, maybe a lot of holidaymakers had arrived.

I headed off down past the town hall, skirting a party of cyclists, none of whom looked all that cycle-fit, and it was then I saw why there were so many tourists. Two cruise ships were docked in the little port. 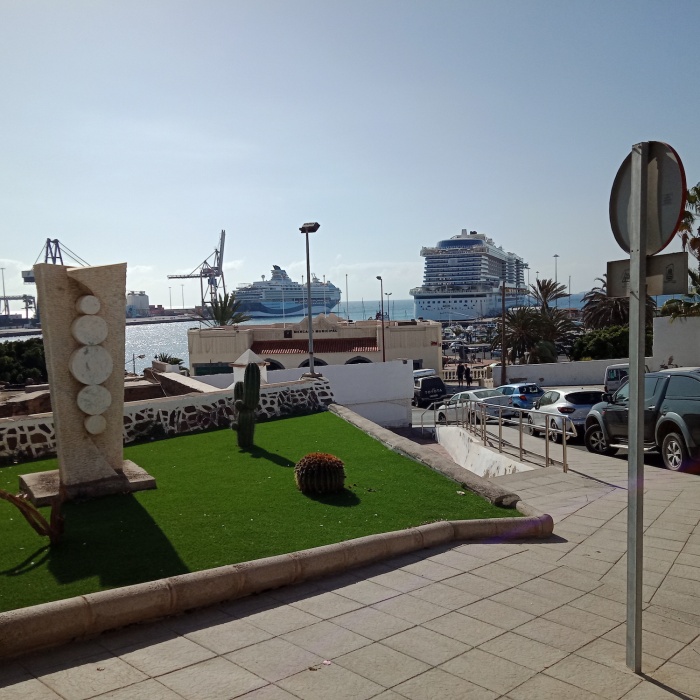 Floating hotels. And they really are imposing. The entire promenade beside the ocean was filled with ramblers. It was not possible to walk in a straight line. I was a little disappointed to see the dedicated cruise ship market, located on the opposite side of the road, only had a smattering of stalls and many of the slots were empty. Seemed to me either a missed opportunity or the cruisers were not known for spending their cash. Something I have noted here on the island is a real lack of tourist bric-a-brac. I have not seen markets filled with artesans selling their wares. Maybe I’m missing something. I’m used to Lanzarote, where they even sell the pebbles off the beach, crafted into jewellery.

I kept walking, dodging, pressing on, hoping locals did not assume I was one of the cruiser pack. Although looking at me, it would have been a fair assumption. I do not resemble the majoreros at all.

Ahead was the beach, which I decided on the spot was my beach, having been there once before when it was completely empty, and those others had no right to it. Only…

They had every right to it, of course they did.

Some guys in a van were setting up music so I sat and listened to Canary Island tunes, caught a little sun and enjoyed the view of the rather grand Palacio de Formación y Congresos de Fuerteventura – that big dark-grey building in the photo above – and the distant mountains, and I marvelled at this wonderful unassuming little city of Puerto del Rosario. I even took a selfie, replete with the ship.

I didn’t hang around long. I headed up to Las Rotondas, where I visited a bookstore to discover what I already knew. There is no place here for my books. No easy spot for them. I would have to make that happen and I think it would be quite hard. Just because an author writes about a place does not mean that place will embrace the works. Depends.

I kept walking, back to the church and on up , and I mean up Calle Juan de Bethencourt, all the way up to the cafe Gaynor and Paul introduced me to, a German cafe selling wonderful rich bread and some of the best coffee in town. Of course, you can rely on me not to take food photos, so here is another mural to finish off. The street art here is fantastic and all part of why this little city has become my ideal place to live. It has everything I could wish for. It makes me feel I have entered a Graham Greene novel. And I do admire Graham Greene.

Isobel Blackthorn is an award-winning author of unique and engaging fiction. She writes gripping mysteries, dark psychological thrillers and historical fiction. She is the author of two novels set in Fuerteventura: Clarissa’s Warning and A Prison in the Sun.