I’m delighted to share my latest review. I’m a fan of this author after reading a previous work, A Single Light, which inducted me into Urban Fantasy. Her latest, Keeper of the Way (Crossing the Line Book 1), is historical urban fantasy. 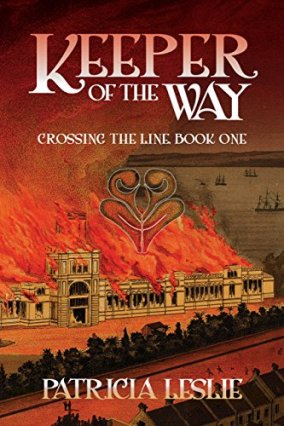 “After news of grave robbing and murder in Dún Ringall, the ancient stronghold of Clan McKinnon on the Isle of Skye, Rosalie realises it is time to share her family’s secrets. Descendants of the mystical Ethne M’Kynnon, Rosalie tells of a violent rift that occurred centuries earlier, splitting Ethne from her sisters forever and causing relentless anguish and enmity between ancient families.
Meanwhile, Algernon and Clement Benedict have arrived in Sydney searching for the lost relics of their family. They are driven by revenge and a thirst for power, and will take what they can to reinstate their family heritage. Their meddling with ancient magic will have far-reaching effects, as they fail to realise ther role in a far greater quest.
In the grounds of Sydney’s magnificent Garden Palace, danger grows as an ages-old feud of queens and goddesses heats up. The discovery of arcane symbols bring the distant past in a foreign land to Australia and will cause a profound struggle with tragic results, a surprising new recruit from an unknown world, and the complete destruction of the palace.
Set around stories and characters in 1882 Sydney, Keeper of the Way includes current affairs, people and buildings long gone, and gives a voice to people history doesn’t always listen to.”

From the opening scenes, Leslie takes the reader back to the ancient customs of the Scottish highlands while making full use of Scotland’s tempestuous weather as Lord Algernon Benedict sets off for the Isle of Skye to find out what happened to his great-grandfather who disappeared after reaching the shores of Loch Slapin. Three decades later, in Sydney in 1879, Rosalie Ponsonby wanders through The Garden Palace in the Botanical Gardens on the eve of an international exhibition. There she pauses to observe the statue of Queen Victoria. She’s the proprietor of The Garden Arms and she’s a witch.

Much of the action plays out in the The Garden Arms. Here, Leslie creates a homey feel, female and strong. The story unfolds from multiple viewpoints, the reader sharing in the perspectives of Algernon, his son Clement, Rosalie and her daughter, Florentine. All the characters, major and minor, are well-crafted and convincing. The pace is slow but never falters. Sydney in the late 1800s is brought to life with evocative and sharply crafted descriptions. The writing style suits the era yet avoids flowery writing or laboured sentences.

“The Botanical Gardens were a forest of trees and shrubbery, drawn from England and forced into a lifetime of servitude on the other side of the world where winter was as summer in their homeland.”

Through such prose Leslie provides a portrait of the emergence of Australian society in Sydney, a bustling southern city delightfully tinged with decadence, receiving waves of migrants as its indigenous population is thrust aside. Leslie handles this transition with sensitivity and insight.

Descriptions of fantastical transfigurations are portrayed with equal finesse. The reader is lured into magical realism, the transfixed observer. Grimoires, incantations, invocations, sigils and demonic spirits infuse the historical narrative, as the ancient ways of witchcraft – healing and life-giving – are pitted against a male counterpart that is dark and destructive.

In all, Keeper of the Way is a pleasurable read from start to finish. I recommend it to lovers of historical fiction, magic realism and urban fantasy alike.