It is rare that I read a general fiction novel set in rural Australia. I thought I better spread my wings a little, so here’s my review of Return to Tamarlin by K. M. Steele. 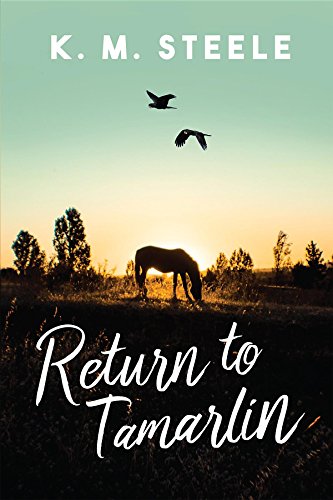 “When Tamara Slender disappears from an isolated property in Western NSW in 1975, gossip runs wild with rumours she has run off with a local man, Roger Bryte.

Months later, Tamara’s teenage daughters, Nancy and Mary, realise they encountered Bryte in caves on their property the day before their mother disappeared. Despite their suspicions, their father refuses to involve the police, and the girl’s grief, fuelled by the town gossips and their father’s inaction, drives them apart.

In 2007 a stranger arrives at the farm seeking information about Roger Bryte. His questions give Nancy a reason to contact her estranged sister. The sisters are reunited, and their mother’s disappearance is finally solved when Mary returns to Tamarlin.”

K. M. Steele has penned an intriguing novel of two sisters and the dark mystery that separates them. Return to Tamarlin is well-written, slow-paced and rich in sense of place. Steele’s rendering of a sheep farm in crisis as its owners battle drought and plague, along with the prejudices and gossip of a small country town are spot on. This social realism provides the perfect back drop for a story involving the disappearance of Nancy and Mary’s mother on the very day they decide to try to re-enact the disappearance of the schoolgirls in Picnic at Hanging Rock, at some caves on their property called the Limeholes. Two weeks earlier, another local disappears, a local the girls encounter when they visit the caves. Are the two disappearances connected? What is it about their mother and her past that troubles both her daughters, and causes one to fiercely defend their father, and the other to flee the farm for larger horizons?

Good characterisation and a well-crafted plot hold the story together and the various tensions within the family and in the local community are convincingly portrayed. Tragedy, loss, grief and belonging are the emotional themes underpinning Return to Tamarlin, themes many a reader will relate to. This novel will appeal to those who want to lose themselves in an Australian rural setting and re-visit Australia in the 1970s, with all of its social prejudices intact.

You can buy a copy here.