When fifteen-year-old Esme Silver objects at her father’s wedding, her protest is dismissed as the action of a stubborn, selfish teenager. Everyone else has accepted the loss of Esme’s mother, Ariane – so why can’t she?

But Esme is suspicious. She is sure that others are covering up the real reason for her mother’s disappearance – that ‘lost at sea’ is code for something more terrible, something she has a right to know.

After Esme is accidentally swept into the enchanted world of Aeolia, the truth begins to unfold. With her newfound friends, Daniel and Lillian, Esme retraces her mother’s steps in the glittering canal city of Esperance, untangling the threads of Ariane’s double life. But the more Esme discovers about Ariane, the more she questions whether she really knew her at all.

Before starting this book, the reader is shown a charming map of a mysterious place named Esperance, capital of Aeolia, a map that hints at what’s to come. The story opens in our world, on the wedding of Esme’s father and her new stepmother, Penelope. Esme isn’t happy and she is unable to disguise it. She’s missing her mother, Ariane, who was lost at sea presumed dead. Esme is a lonely child, little liked by the villagers of Picton Island where her father is lighthouse keeper. An outsider, she wants nothing more than to find out what happened to her mum.

When Penelope’s sister, the despicable Mavis, moves in to mind Esme while her father has his honeymoon, Esme experiences strange headaches and dizzy spells. She has a vision of her mum and dad and is puzzled by it. Her anguish over her mother intensifies and she decides to take off to Spindrift Island where Ariane disappeared many years before. As her quest unfolds, Esme is swept unexpectedly into another world, the world of Esperance, where she makes new friends and continues her search.

What unfolds is a series of adventures large and small, of dragons and other mythical creatures, and of special magical gifts. To say more would spoil the enchantment.

Foster has a fluid, engaging narrative style. The writing is simply exquisite. The pacing, plot twists and characterisation are just perfect. Depictions of the city of Esperance are conveyed in vivid and captivating detail. The various threads and elements of the story are woven together beautifully, culminating in an ending filled with wonder and surprises.

This is a story of loss and searching, of ancient Greek myths, of the artistic temperament and supposed insanity, of minds capable of accessing the inner realms the rational mind cannot reach. Absorbing, enchanting, whimsical, Esme’s Wish is a story to lose yourself in. I would recommend this book to readers one and all. Thoroughly enjoyable.

Having read and thoroughly enjoyed Harlequin’s Riddle, the first in the Tales of Tayra series by debut author, Rachel Nightingale, it was with much anticipation that I opened the second, Columbine’s Tale. 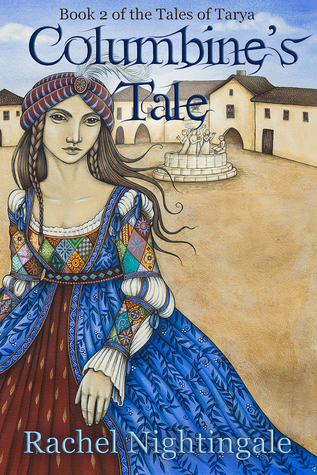 “For three hundred years the travelling actors of Litonya roamed the land entertaining crowds, but secretly leaving devastation in their wake. Is Mina the only person with the power to stop them?

In the ethereal otherworld of Tarya, Mina begins to master the rare, inexplicable powers  attached to her gift for storytelling. She discovers she can touch dreams, influence the real world, and perhaps find out who is manipulating Tarya for dark purposes. In the waking world Mina is on the run, beset by divided loyalties between the travellers, and caught between two men she could love and a brother who desperately needs her help.”

As with all series, the reader should have read the first Harlequin’s Riddle. In Columbine’s Tale a short prologue provides a concise and engaging summary for the purposes of catch up, with many useful reminders of the story so far. Columbine’s Tale opens with Mina on the run, determined to find her brother, Paolo, and this time, she believes she knows where he is. She’s being pursued, too. Thinking she knows who by, she’s in terror for her life as she tries to escape the clutches of the Gazini players who are determined to keep her. Then Mina encounters Sofia, a master story teller, and together with their team, the two travel the countryside and, through the power of telling stories, hand back dreams stolen by the players. Mina is determined as ever to undo the wrongs of others, and her quest leads her into increasing danger. Mina’s quest is thwarted by menace and betrayals and as the story unfolds, petal by petal, old betrayals are healed and new secrets revealed.

Through Mina and Sofia’s eyes, Nightingale portrays story telling as a gift, one that gives something to the listener, which she juxtaposes with the approach of the players who steal peoples’ dreams and hand them back to audiences as entertainment. But that is only the tip of this complex, intriguing and beautifully told novel.

Columbine’s Tale is told from multiple points of view and the main plot lines are carefully interwoven. The use of jump cuts works well as does the building of suspense, culminating in a dramatic edge-of-seat flourish and a denouement that leaves the reader wanting the third and last in the series.

Nightingale’s characterisation is impeccable, and with the fewest words she conjures a convincing three-dimensional cast. Descriptions are detailed and evocative, providing the reader with a powerful sense of place. Nightingale makes not only her imaginary Italy alive in the mind of the reader, but also her etheric realm, Tarya, in all of its layers and complexity. The prose is gentle, soft and acts on the psyche like balm. Tales of Tarya is a series to sink into and savour.

Nightingale plays with the fourth wall as Mina learns to tell stories from master story teller, Sofia, and here the reader is introduced to the craft of story telling and finding the heart of a tale from a special and mythic perspective. The metafictional element works and invites the reader to consider the true value of the narrative form.

Ultimately, Columbine’s Tale is about creativity and healing, of good versus evil, of the use and misuse of magical powers – the power to create and to destroy – and the all-important moral message underpinning the series, that creativity should be life-giving, not life-taking. In all a delightful and insightful read.