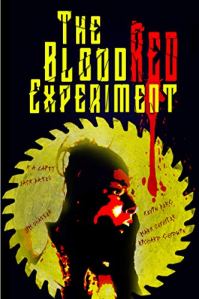 About The Blood Red Experiment

Inspired by the genius of Hitchcock and his films, latin luminaries such as Argento and Bava directed macabre murder-mystery thrillers, that combined the suspense with scenes of outrageous violence, stylish cinematography, and groovy soundtracks. This genre became known in their native Italy as giallo.

Giallo is Italian for yellow, inspired by the lurid covers of thrillers, in the way that pulp fiction was derived from the cheap wood pulp paper of the crime stories, or Film Noir came from the chiaroscuro of the German Expressionistic lighting.

Craig Douglas and Jason Michel bring gialli-inspired stories together from some of the best crime writers on the scene today to a wider audience, giving birth to a new literary movement in crime writing, NeoGiallo, and drag this much maligned genre screaming and slashing its way into the 21st Century.

My thoughts on The Blood Red Experiment

The six stories contained in this anthology are exemplars of the sub-genre of giallo. The pages ooze sensuality, the writing is slick and the horror stylised and graphic. After a useful introduction to the terrain by Richard Godwin, the anthology opens with K. A. Laity’s ‘Madonna of the Wasps’, a gruesome tale of ritual killings in a Bohemian Parisian world, enacted to sate the hunger of a bloodthirsty dominatrix. Like all the authors in this anthology, Laity’s writing is poised and masterful. The author provides an interesting and diverse cast of characters and the protagonist, Mira, an artist with a fantastical imagination, is especially well-rounded. ‘Madonna of the Wasps’ is a fast-paced tale with some unexpected and shocking twists. Ultimately satisfying and provocative, this story is a terrific opening not just to the anthology, but to the sub-genre of neo-giallo.

For the uninitiated, Mark Cooper’s ‘Quaenum In Illis’ is the most accessible read in the anthology. Here, a former scholar of linguistics is invited by a mysterious woman to translate the pages of an ancient text. Cooper draws the reader straight into the intrigue in true thriller style, saving the blood for later. Moody, dark and fascinating, the mystery and tension unfold from shifting perspectives.

‘Canvas of Flesh’ by Jack Bates will bring out the voyeur in the best of us as artist Preston completes his art exhibition using a particular portion of the body of Jessica. Sensuality and horror blend beautifully in this tale, the reader enchanted and disturbed all at once, compelled to turn the pages. As the story unfolds the initial wonder soon shades into revulsion, as Bates confronts the reader with a portrait of obsession.

Urban, noir and mysterious, Jim Shaffer’s ‘Blood of the Lamb’ is a superb example of where giallo takes a crime-thriller. The story opens in a church then follows the observer to a shabby hotel, then back out on the streets, for the kill. The story switches to Frank, a feature writer quick with his camera. What unfolds will be read in one sitting, the eyes never leaving the page.

‘The Impermanence of Art’ by Kevin Berg is probably best not read while eating. Graphic horror is rendered sensual, the storytelling intense and unrelenting until the final twist as an art student is seduced by some illicit videos streamed on her phone by a maverick art instructor. Berg’s offering is at the extreme end of the sub-genre and not for the faint of heart, yet it is a gripping tale told with imagination and wit.

Bookending the anthology is Richard Godwin’s ‘Machine Factory’, an exposé of a deranged psychiatrist. In taut, rhythmic and urgent prose, Godwin thrusts his readers inside the mind of a serial killer. The extent of the protagonist’s insanity is boundless, his fanciful and quasi-intellectual rants alarming and all too real. The story is brutal, confronting and disturbing. There is no redemption here.