When I planned to spend a month on this fascinating Canary Island, I imagined getting around on public buses and placing my faith in their esoteric timetables. Instead, my fabulous friends here are showing me around. Yesterday, photographer and artist JF Olivares took me south. The day proved hazy thanks to a strong easterly bringing with it Saharan dust. Which means my photos are not the best photos of these places, but they do tell a story. The photo below is a typical view of the island on the eastern seaboard. 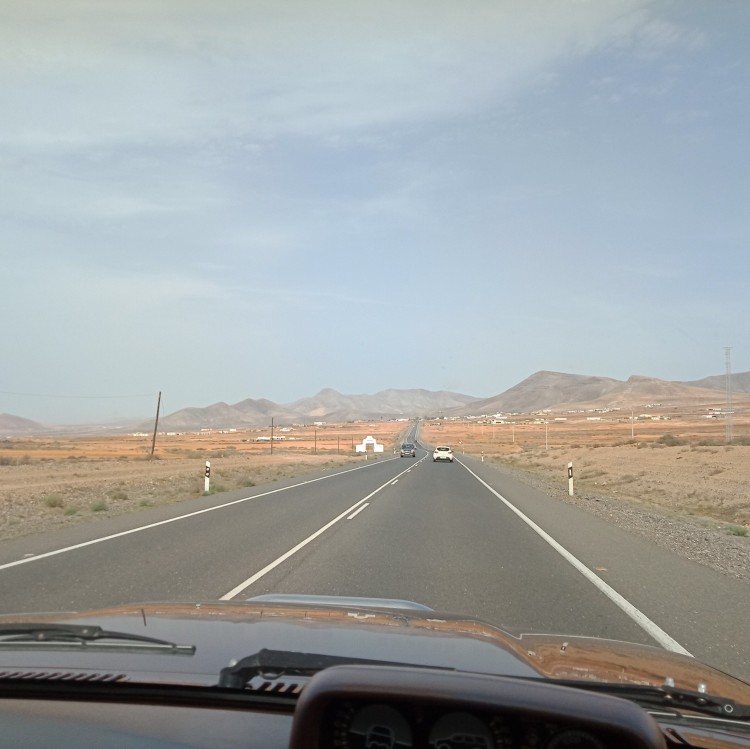 After a late breakfast in a cafe near Gran Tarajal we turned inland, Oli always preferring the backroads. With him, I felt I was getting a glimpse of the real Fuerteventura. It is a privilege to know someone who has spent all his life in a place, seen the changes as the island transitioned from a forgotten backwater into a tourist mecca. He remembers the island when the population was small, when the development was just about non existent. I listened. I could feel his pain. Trouble is, you can’t undo time.

At first, as we drove into the interior, the mountains towered in the mid distance. 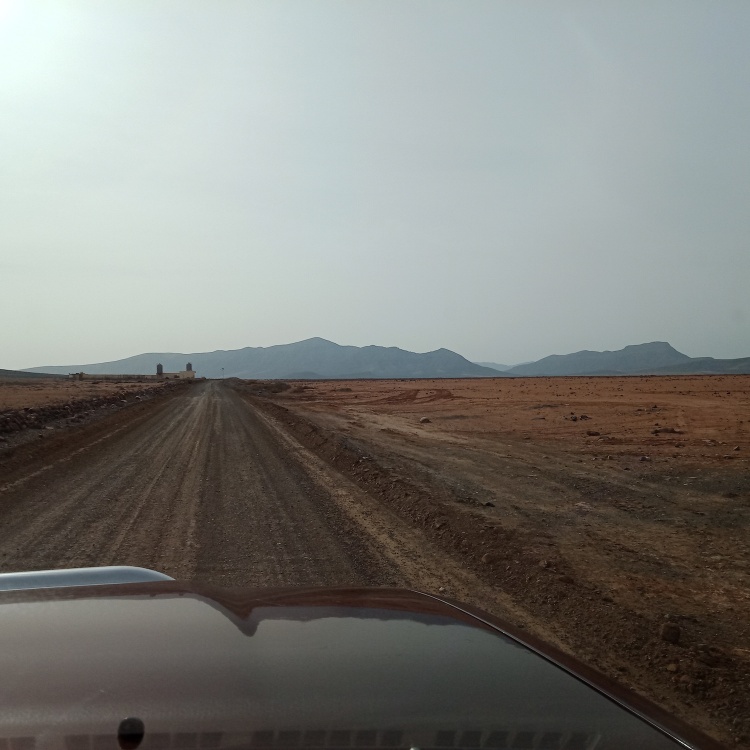 Before long, we were in amongst them. Their distinct formations cannot fail to grab the eye. Photos flatten a landscape. These old volcanoes rise up out of the flat plain in every direction. Monoliths, sculptural, as though the island itself was a vast exhibition. 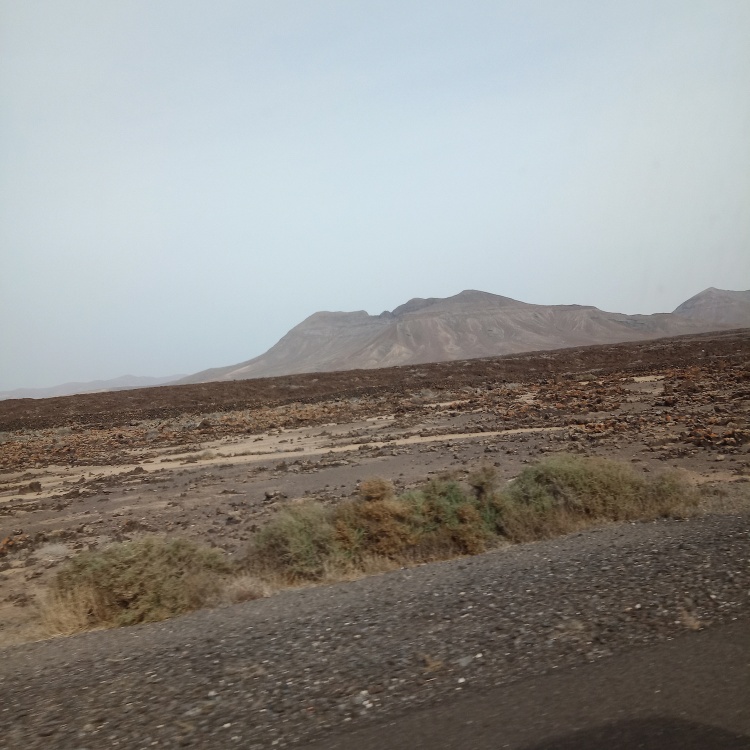 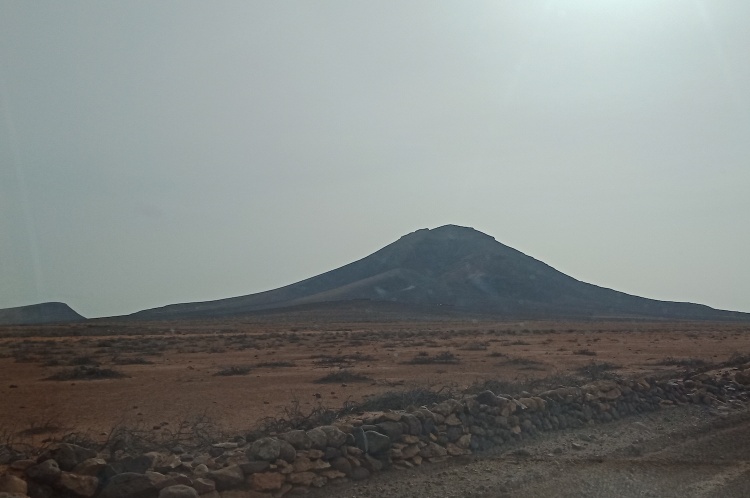 On and on we went. We chatted about life, the island, the future, sharing the same passion, the same values, mourning what has been lost here. My Spanish had improved from the week before and I was able to communicate in full sentences, which only spurred Oli on, confident I could understand. Then, the landscape changed.

We’d reached a portion of the southern massif, where Montaña Cardón affords a stupendous view. The road was narrow, the bends many and sharp and Oli could see I was nervous. I have a terrible fear of driving on roads with a sharp fall to the side. I wish I could overcome it. Maybe with practice. The scenery all through this area is breathtaking. The short walk to the summit from the small parking area contained scores of tourists, all of them much braver than me. I did manage to take this photo of the undulating mountains. 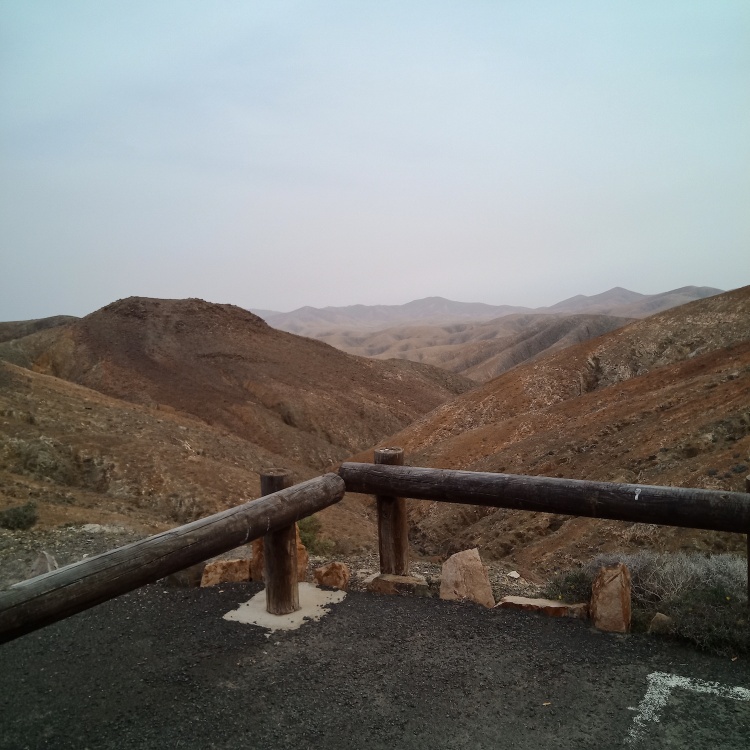 It seems I am not the only person to remark on the femininity of the landscape, which Oli says resembles a heavily pregnant woman.

Our next stop was the coastal town of Ajuy, which took us past this mountain, which the locals have named La Teta de la Abuela, or Grandmother’s Tit. 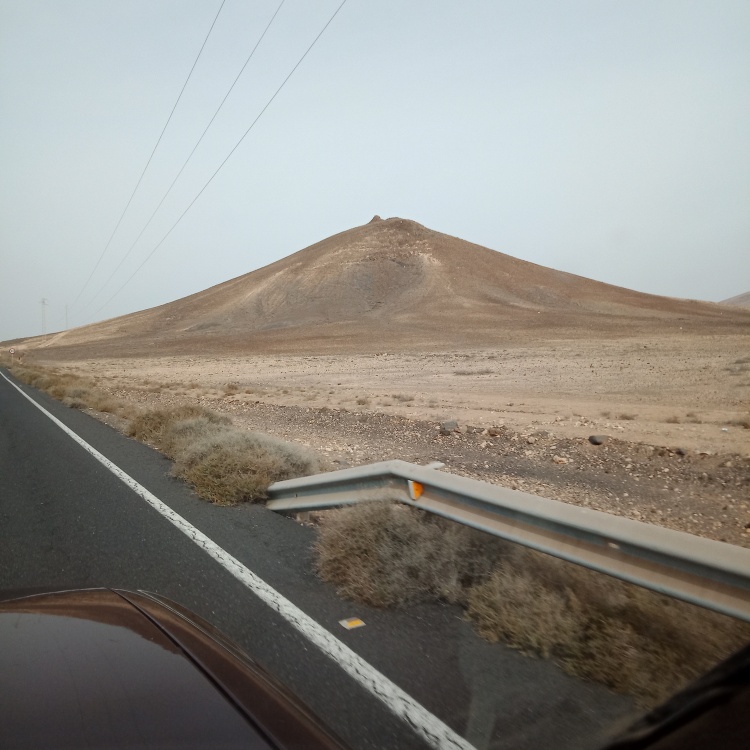 A great disappoint to Oli and to me are the power poles. The government went for the cheap option of erecting towers to provide electricity to every region. They should be put underground. They graffiti the landscape.

The west coast of Fuerteventura is tremendous. The immense force of the ocean is felt here. For a long time, we stood on the low cliffs surrounding Ajuy with the wind blasting from the east and the Atlantic waves pounding the shore, waves much bigger than they look. 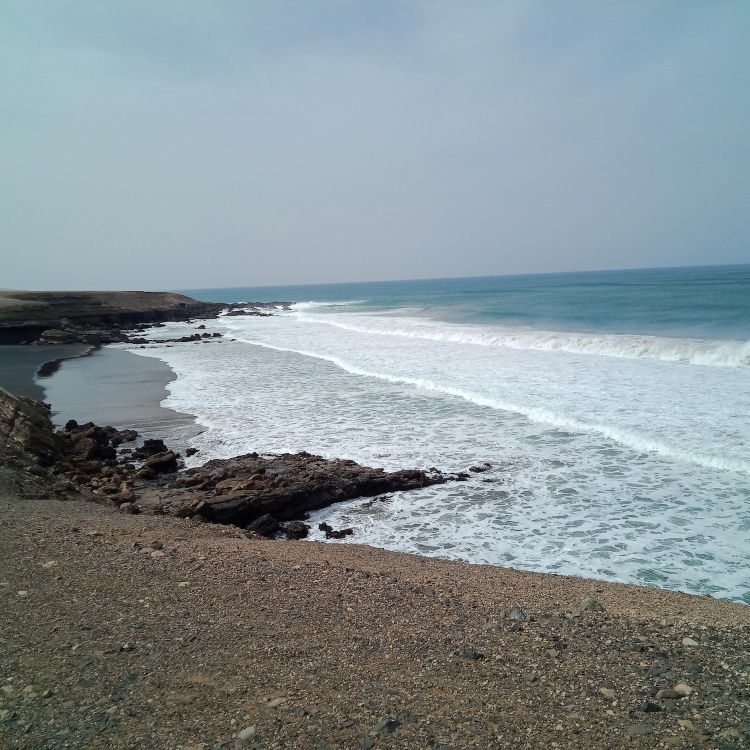 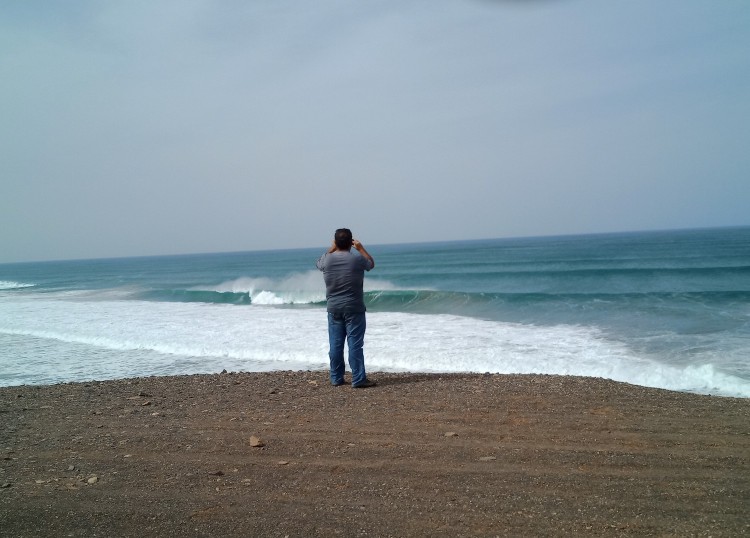 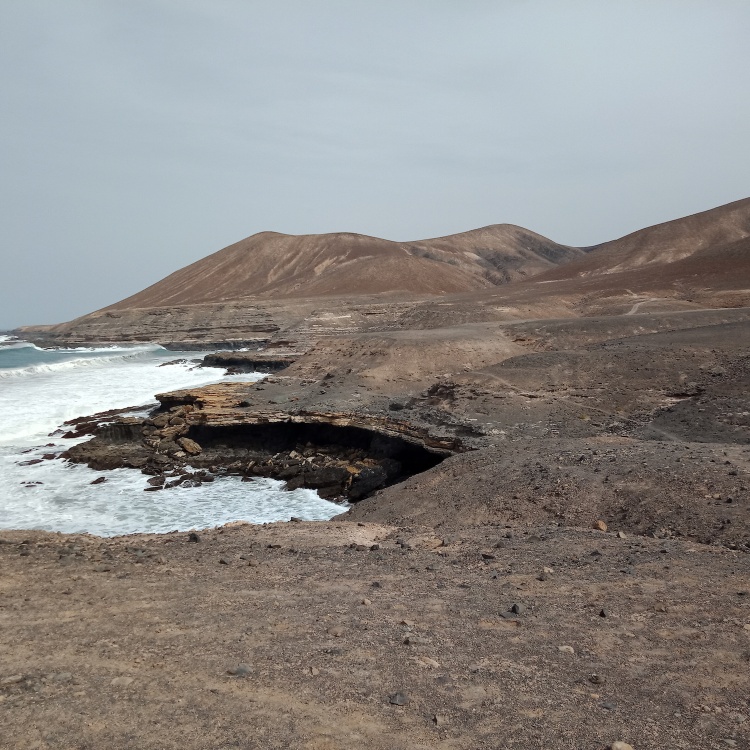 From there we headed down a back road to the water and this fabulous rock formation. 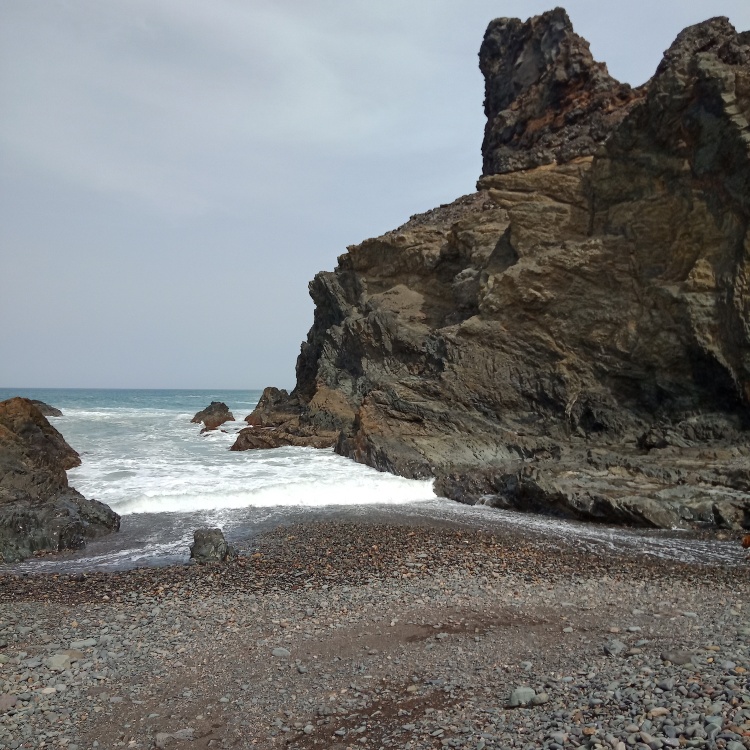 Oli was on the hunt for pebbles. 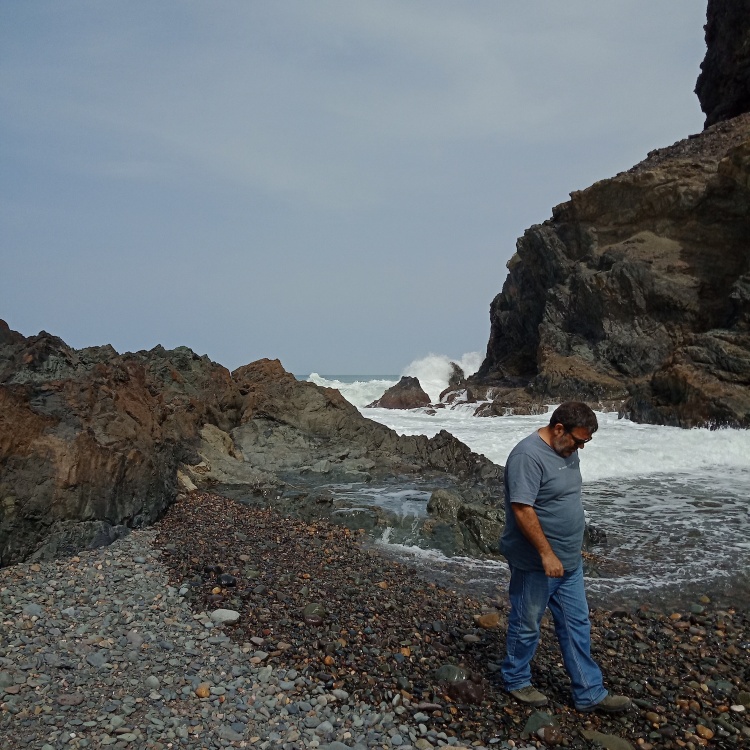 I kept one which fits in the palm of my hand. 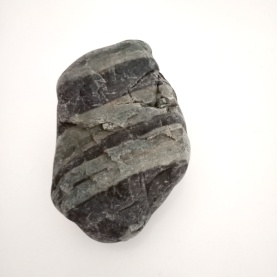 I managed to take this photo without any tourists. Everywhere we went, on every single dirt track, someone was there before us. It was inevitable and yet disappointing as there are so few places locals can go to get away from holidaymakers, to gain a sense that the island still belongs to them. The roads here are terrific and they need to be; there’s a continuous flow of traffic on each and every one of them, sometimes a trickle, other times a steady flow, but always people, always vehicles, wherever you go. It is a pity, as this should be wilderness. Tourism is the mainstay of the economy, but how to control it when people do not like being controlled. Impose a rule and you can be sure the unreflective will march with their feet to other climes. How could I explain to Oli that it was the same the world over. Beside, I think he’s aware. Tourism is the modern version of colonisation. 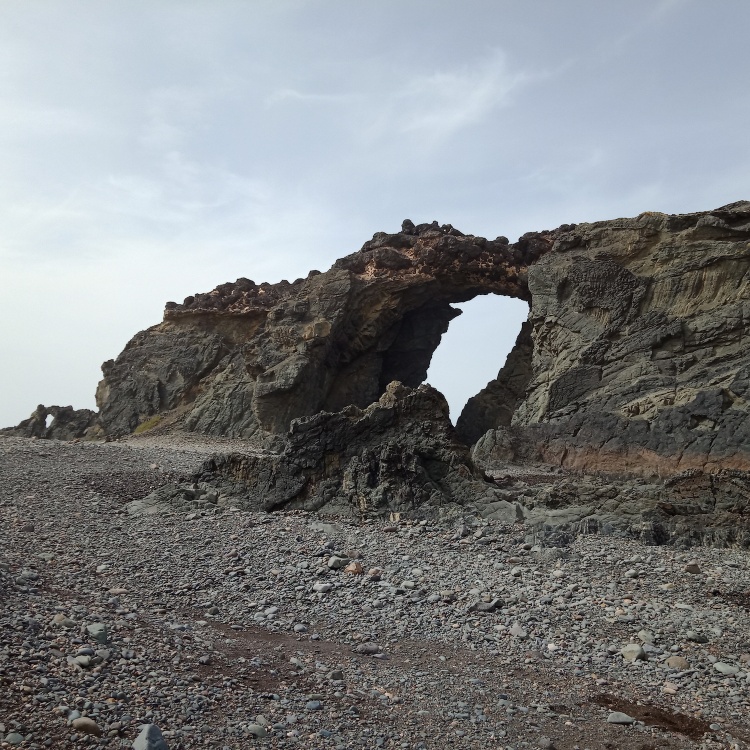 Oli’s dog Rohn didn’t mind the presence of others. He swam about in the water, joining this tourist with his can of beer and his cigarette. The others are out of the frame. The guy in the water was on borrowed time; the tide was coming in fast. 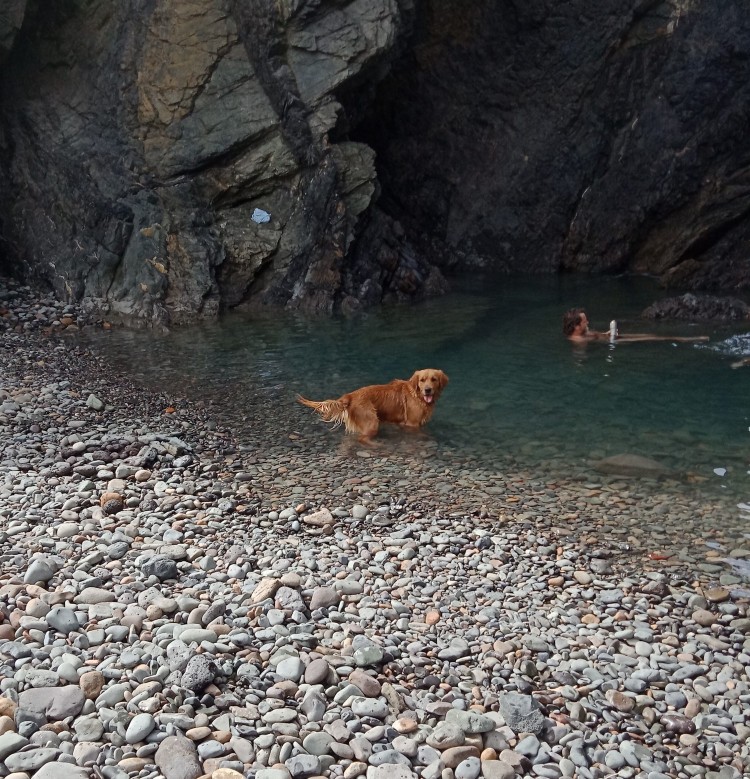 We managed to have this secluded spring near Ajuy to ourselves, passing some other visitors exiting the barranco as we arrived. The water in this dam was stagnant and green. There’s been no rain here this winter. Rohn hadn’t a care and we enjoyed the smell of his coat all the way home.

As we whipped through the inland villages Oli explained that Fuerteventura lacks the architectural restrictions of its sister island Lanzarote. I already knew. We both think local government zoning of residential land needs to be tightened to prevent a sprawl of scattered dwellings across the island. Fuerteventura is not an island of pretty villages, but there are exceptions. Páraja is a pretty town and Triquivijate too. Tiscamanita is charming due to its position in the landscape, as is Agua de Bueyes. But what the island majors in is landscape:

Isobel Blackthorn is an award-winning author of unique and engaging fiction. She writes gripping mysteries, dark psychological thrillers and historical fiction. She is the author of three novels set in Fuerteventura: Clarissa’s Warning, A Prison in the Sun and The Ghost of Villa Winter which form part of her Canary Islands fiction. To find out more, click here.